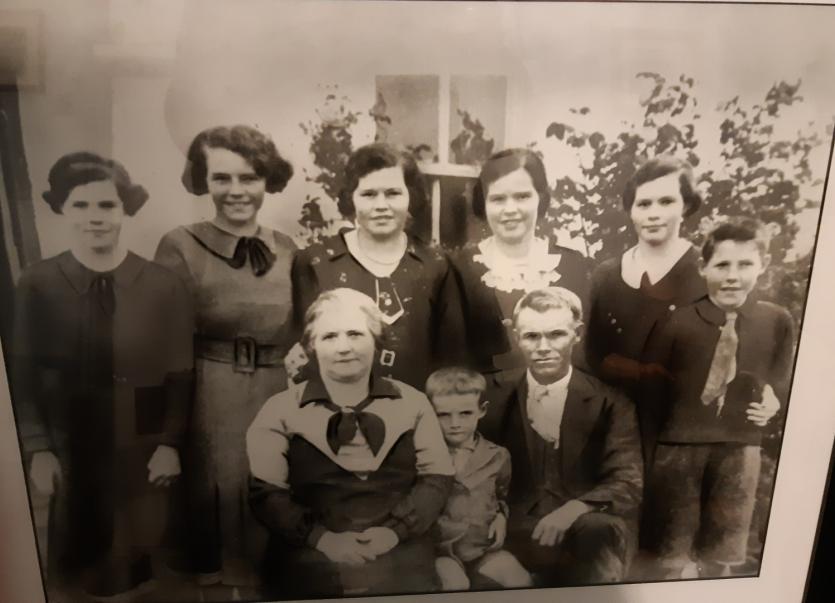 Mother's Day on Sunday next will be a special day in the O'Donnell household in Shalvey, Kilcar, where Maggie O'Donnell will celebrate her 100th birthday to join an increasing band of Kilcar centenarians.
Maggie is hale and hearty and still has a roguish smile and loves to have a bit of banter with her family, grandchildren and great grandchildren.
Born in Kilcausey on March 31, 1919, Maggie was the third in a family of seven McShanes, five girls and two boys. Mary and Ellen were older, while Una, Brigid, Patrick (Paddy) and Christy were younger. Her parents were Michael and Una McShane.
"I'm the last of them," says Maggie.
"I was christened Margaret and got the name Maggie from the younger ones because they couldn't say Margaret.
"I went to school in the bare feet and carrying a couple of clods of turf. My father had a cart and he used to take a cart load of turf to the school in October.
After finishing in Coguish National School, like many others, Maggie emigrated for work.
"I went away to England. I worked in Worcestershire. I was sewing in a big industrial school. We made their clothes and did the housework.
Maggie spent some time in Dublin and Belfast before returning home, where she met and married her husband Francis (Francie) O'Donnell on August 16, 1951
She set up home in Francie's home place of Shalvey where they raised their family of three - John, Mary and Anne.
Of an industrious nature, the skills she had learned when away from home of sewing and knitting, were put to good use. Like most families, they were self-sufficient,farming and fishing.
Maggie was able to make clothes for the children and knit garments and also helped out on the farm. She accidentally became a B&B house when strangers would call wondering where they could stay for the night. "There was nowhere around here at the time until you got to the Glenbay Hotel," says Maggie, so she began by renting out one room and this grew from there.
Maggie is happy and outgoing, her big interests were card playing (25 and whist) and bingo.
"She is the best partner to have at cards," says her granddaughter, Louise. "She taught them all the winks and the nods," says daughter Anne.
As for the secret of long life, Maggie just shrugs: "Just live to you die."
Maggie enjoys a wee Powers and also enjoyed a cigarette "after dinner. I would light it up and then might leave it on the range and when I went back it was just a roll of ashes."
She had a visit from the Bishop of Raphoe Alan McGuckian SJ last weekend when he was in Kilcar for Confirmations and the cheque from the President, Michael D Higgins was being awaited on Monday evening last.
"I'll not see it," quipped Maggie.
A special Mass in St Cartha's Church, Kilcar is being celebrated on Saturday at 2 pm and there will be a celebration afterwards in the Blue Haven Hotel to mark the special occasion.
Maggie is being cared for in her own house by her daughter Anne and will be joined by her grandchildren Kieran, Loretta, Louise and Owen; great grandchildren Michaela, Joseph and Fiachra as well as family, friends and neighbours for the big celebration.

The Kilcar '100 Club'
Maggie O'Donnell will be the latest addition to the Kilcar '100 Club', surely a record for a parish for the number of centenarians in all of Ireland.
Since 1994, Maggie O'Donnell becomes the 15th centenarian in the small parish, a remarkable statistic. And there are at least two others very close to joining the club, one later this year and another in 2020.
Of the centenarians Cassie Dominic Sweeney set the Kilcar record. She was in her 109th year when she passed away in 2003.
Kitty 'Dearg' Byrne is at present the oldest alive, having celebrated her 106th birthday on February 4th.