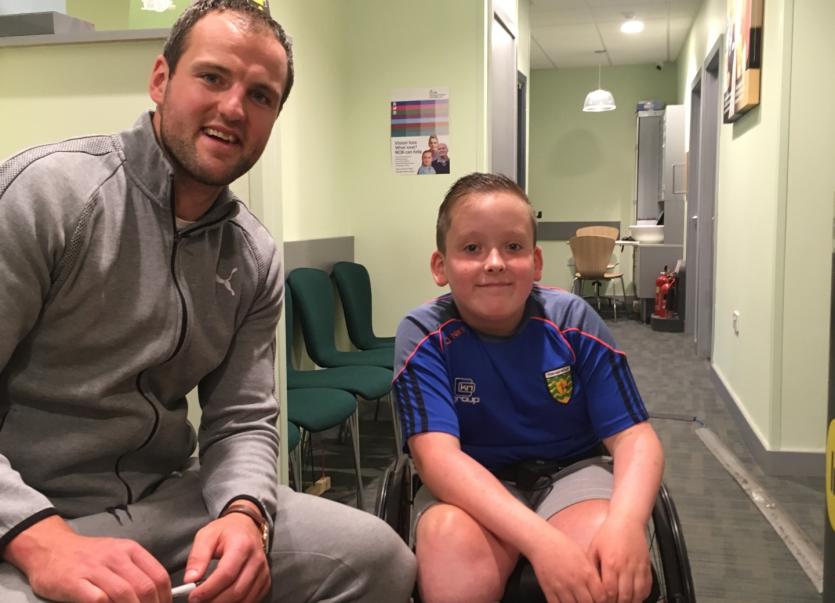 Jamie Lafferty is in training for the Northwest 10k next month just a year after he had major surgery on his left leg. Jamie, a huge Donegal GAA fan, is pictured with Donegal captain Michael Murphy

A young boy from Bruckless has set his sights on finishing the Northwest 10k just 12 months after he had his left hip reconstructed in major surgery.
Jamie Lafferty, 10, was born with spina bifida and hydrocephalus but has used his latest bump in the road to motivate him to power through his fitness goals and set his biggest target to date.
Just last Easter Jamie spent a week in Our Lady’s Children’s Hospital, Crumlin and spent three full months entirely off his feet after having his left hip reconstructed and left leg broken.
He has worked hard with his physio Tabea McCrea and personal fitness coach Paul Smyth of Smyth Inclusive Fitness at The Base, Stranorlar week in week out to return to his original fitness levels before the surgery.
Jamie’s mother Caroline says Jamie, who is in fourth class with Mrs Helen Roger at Dunkineely National School, enjoys school - especially break time with the lads when he has a kick about the yard.
“He gets stuck in as much as he can and would certainly not let his condition keep him from taking part,” she said.
Jamie uses a walker for school to help with balance and his wheelchair for long distances and basketball.
When the Northwest 10K announced that Donegal Spina Bifida were going to be one of the beneficiaries for this year’s race, the goal was set. Jamie instantly contacted his coach Paul and set his mind towards May 5.
As he will take part in his chair he has been working on upper body strength and getting his distance up.
“So far he’s up to almost 8k in training,and now he is focusing on improving his time and getting up hill sprints because he is determined to do this by himself,” Caroline said.
“He has a great relationship with his coach. They have taken to social media to upload progress videos and he is really enjoying the build up in preparation, keeping the momentum going even on the weekends.”
Jamie has shown a determination to put the hard work in to finish the race.
“The early days of his recovery were tough and for a while his light was a little dim but this goal has sparked him on,” Caroline said.
“It has given him a new sense of determination with the discipline of training and setting small goals. As the weeks pass he is delighted with the progress.”
Just last weekend he met Cathal Gallagher from Operation Transformation for a 5k walk with his Foroige Group from Killybegs and it is hoped that Cathal will join Jamie for the 10k on May5 in Letterkenny.