Ten-man Harps lose out to Derry 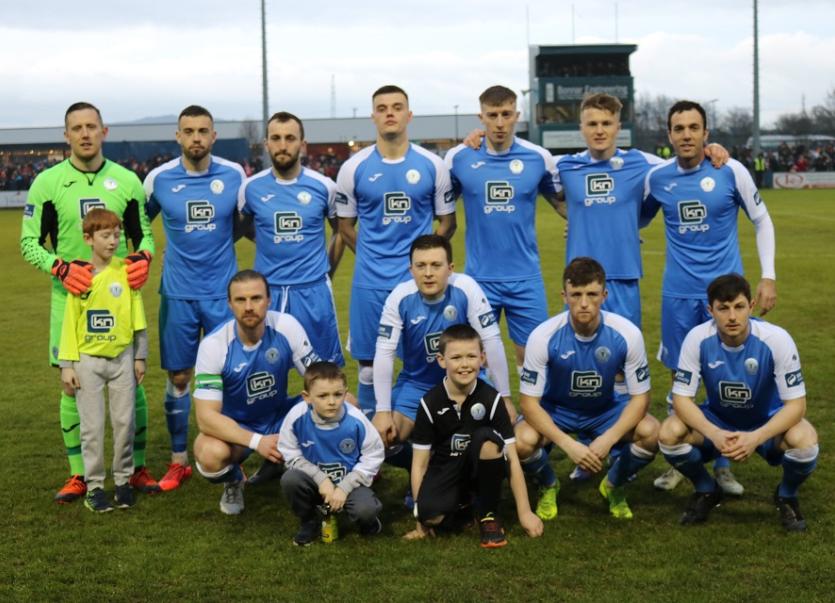 David Parkhouse scored twice in the dying minutes to help Derry City to a North West derby win against a Finn Harps team who played almost an hour of this game with ten men.

The dismissal of Colm Deasy for a terrible tackle on Ciaran Coll on 37 minutes turned this contest on its head.

Up until that moment, this had been an even game with both sides enjoying periods of dominance.

But Deasy could have no complaints when he was red carded for a nasty tackle on the former Harps captain who was then stretchered from the pitch.

Coll’s replacement Aidy Delap fired Derry in front seven minutes after the restart. And it was to mark the start of an action-packed second half which saw Parkhouse score two late goals to help his team to victory.

Finn Harps had picked up their first win of the season on Monday night when they beat Sligo Rovers in the League Cup. Ollie Horgan kept faith with Tony McNamee who made his first start of the season in that game - and that meant he came face to face with his older brother Barry who captained Derry at midfield.

Elsewhere there were recalls for goalkeeper Ciaran Gallagher, John Kavanagh and Caolan McAleer while Horgan included teenagers Stephen Doherty and Michael Gallagher on a bench that also featured the returning Mark Timlin.

For Derry, Conor McDermott was named ahead of Darren Cole at right back and Jamie McDonagh, fresh from a four-game ban, was preferred ahead of Eoin Stokes.

Harps started well and took the game to their opponents with Nathan Boyle and Caolan McAleer looking particularly lively early on.

The home side carried a big threat from McNamee’s long throw-ins and McAleer’s deliveries from set-pieces and Derry at times, looked nervous at the back.

The first big moment of the match came at the midway point of the half. City goalkeeper Nathan Gartside collected a John Kavanagh free into the box but as he went to kick clear, the ball struck Niall Logue on the back and the loose ball was turned into the empty net by Keith Cowan.

It was one of those ‘what happened next?’ moments but referee Neil Doyle decided that Logue had committed an offence by jumping in front of the goalkeeper. Harps fans will argue that Logue was well away from the keeper when the kick was taken, but the Harps defender was yellow carded as a clearly angry Horgan made his feelings known outside the home dug-out.

Derry City were fortunate that the decision went their way and it seemed to lift them into life as they enjoyed the better of the game thereafter.

Barry McNamee sent Jamie McDonagh in on goal but from a difficult angle, the wideman’s effort was helped over his own crossbar by Ciaran Gallagher.

Then on 37 minutes, we had another big talking point when Harps defender Colm Deasy was shown a straight red car following a reckless challenge on former Harps captain Ciaran Coll. The Derry City left back received lengthy treatment on the sideline before being stretchered into an ambulance and brought to hospital.

His replacement, Delap, fired Derry in front on 52 and while they should have kicked on from that, the visitors were pegged back when Nathan Boyle equalised on 74 minutes.

But the ten men conceded again on 84 minutes when Parkhouse’s wonderful header flew in past Gallagher.

The Harps goalkeeper was at fault for the third Derry goal deep into injury time when he miskicked his clearance allowing Parkhouse to run through to score into the empty net.

There was still time for a fifth goal - scored from the spot by Mikey Place following a foul in the box on Keith Cowan.

But it was the travelling supporters who were celebrating at the finish as their team took the points.