Exact location of earthquake not known yet 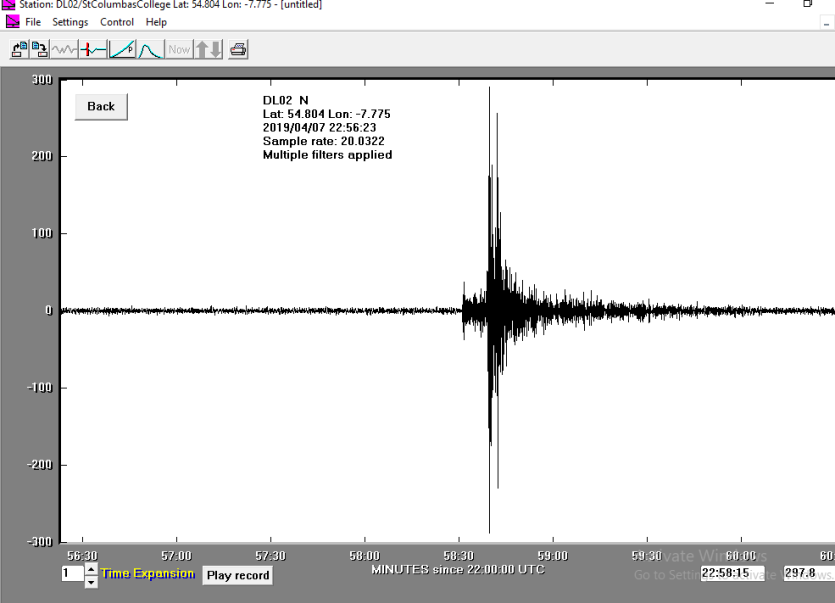 The seismograph reading of the earthquake from St Columba's College, Stranorlar

Donegal has experienced one of its strongest earthquakes on record.

People in south Donegal felt the magnitude 2.4 tremor at 11.58pm on Sunday.

The quake occurred in the Donegal Bay area and was felt strongest in the south west of the county.

Dr Martin Möllhoff, Director of Seismic Networks at the Dublin Institute for Advanced Studies, which is supported by Geological Survey Ireland, said the precise location of the earthquake is unknown and it could have taken place on shore. More information which is yet to be gathered could pinpoint the location, he said.

He said the magnitude matches the strongest onshore earthquake recorded in the country, which was in Buncrana in 2008, although stronger events have been recorded offshore.

Around 30 people had filled in a form on the website of the Irish National Seismic Network giving details of where they felt the tremor.

Donegal is one of the most seismically active parts of the country with the most quakes occurring in and around the Fanad peninsula.

The earthquake was picked up at a monitoring station at Inch island in Inishowen and also by the seismometer at St Columba’s College in Stranorlar.

The last earthquake recorded in Donegal was in 2017 which was magnitude 1.5.

“In absolute terms, it is not very strong. Some countries like Japan or Iceland, would have that a  number of times a day, but in Ireland, it only happened every one or two years,” Dr Möllhoff said.

“It is one of the strongest we have recorded close to shore. There is uncertainty about the location. It could just be on shore. We need more information to get the precise location. It is somewhere around Donegal Bay and might as well be on shore.”

Kenneth McDonagh of the Donegal Weather Channel said he received reports from people who heard and felt the tremor from Kilcar to Termon.

“People in the Kilcar and Glencolmcille area felt it the strongest. People heard a massive bang. It is not common to have them here but we do get them every two to five years.”