That winning feeling when you are top of the table 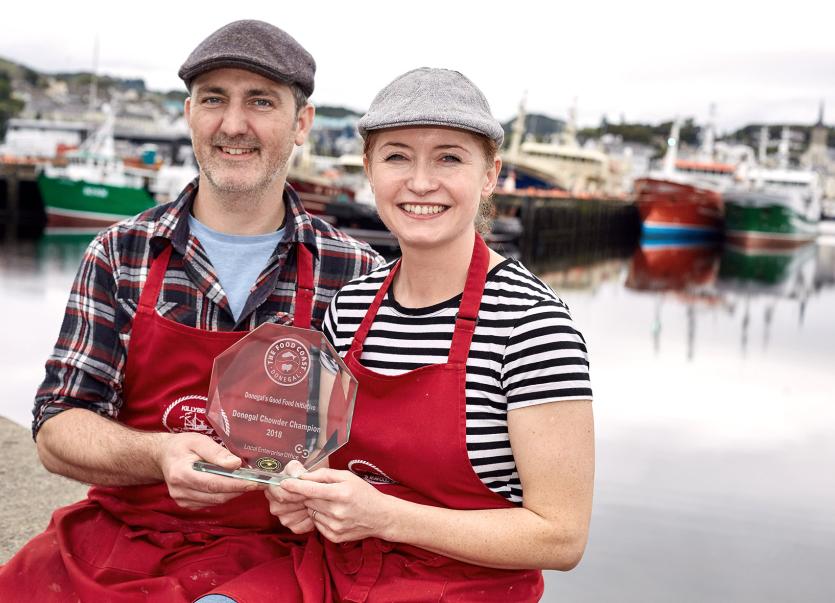 Delighted Killybegs-based chef Mairead Anderson said waiting on the result of the All-Ireland Chowder competition in Kinsale at the weekend was a nerve-racking experience, but the excitement of hearing their name called as winners is something that will live long in her memory.
Mairead and her husband Garry from Killybegs Seafood Shack were crowned All-Ireland champions at the 9th annual contest, with Annagry’s Caislean Óir restaurant taking 3rd place.
“My phone has blown up since the news broke that we won. I’ve been getting so many messages of congratulations and we are truly delighted,” said Mairead who added that they had not realised the competition to be as tough as it was.

“It was a very tough competition, they take it so seriously and it is a big undertaking to take part, so to win it is just amazing.”
Head of Enterprise in Donegal, Michael Tunney, congratulated Mairead and Garry and said the success demonstrated the value of the work being done by Food Coast Donegal.
“One of the key aims of the Food Coast is to highlight the food offering we have in the county and we have been instrumental in helping promote and organise the Donegal heats of the Chowder Cook-Off where there is always tough competition,” he said.
“We are delighted for Mairead and Garry and it is fantastic for the county to have the All-Ireland Chowder crown yet again.”
Members of the public vote for the winning chowder and Mairead said they had no indication of where they stood in the running.
“I know Garry’s chowder is a very good chowder, made the way I think chowder should be made,” she said.
“But it is a slow process and then to have to make 60 litres of it makes it more difficult.”
Mairead added: ““People knew that Kieran in Nancy’s Barn had won before and went on to win the World Title and with Caislean Óir playing a blinder to take 3rd spot, so many were coming up to us and expressing their excitement that Donegal chowder is so good.”