From Donegal to Peru - a journey from Bogagh to the Andes! 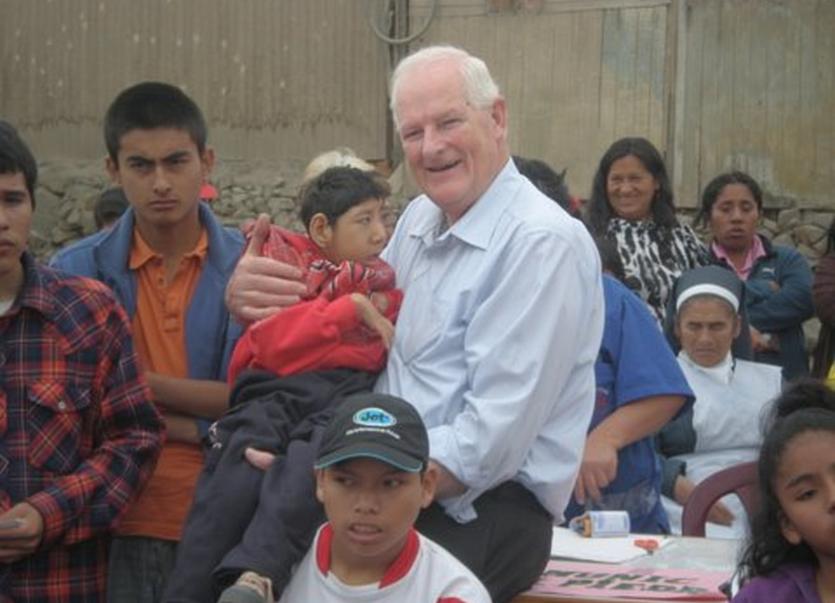 “There’s not tuppence in it for me, that was never the motivation… I just love the people.” - Michael Murphy pictured among some of his many friends in Las Lomas in Peru

Ten years ago, I wrote about the late Tony Byrne from Glencolumbkille after whom St Joseph’s GFC in County Laois was named.
Former Laois footballer and Bluegrass musician Tony O’Brien took me out to see his grave, his old home and St Joseph’s ground. I felt a great sense of pride, despite not knowing the man, and his presence as a teacher, coach, musician and visionary still lives on in great measure.
That night, at the Athy Bluegrass Festival, as Niall Toner sang his tribute to the father of Bluegrass music, Bill Monroe – ‘The Master’s Resting Place’ I thought of Tony Byrne, who was affectionately known by one and all as ‘The Master’.
What I didn’t know at the time was that Tony Byrne not only was a great inspiration to a local lad but crucially, taught him Irish. Little did the youngster know then that he would spend much of his life in Killybegs and ‘In Through’, but incredibly, it was while he was learning Spanish in the poorest region of Peru, that his native language - which he thought he had lost - came flooding back to him.
In 1967, 20-year old Michael Murphy from Laois came to work in Killybegs as a Board of Works Civil Engineer, met and married Anna Hegarty from the town in 1968 and moved to Dublin in 1969.
They returned in 1973 and lived for a few years in Bogagh, Kilcar, next door to the Galligan family with whom they became lifelong friends.
By 1976, they had set up home in Killybegs but as Michael told me when I visited him in Killucan, “Bogagh was always very special to us.”
He became involved in house and holiday home building but retired in 2003, and the following year made his first visit to Peru.
“I was heavily involved in Cursillo in Donegal and heard a lot from returning priests ( the diocese of Raphoe is twinned with Lima) about the conditions there.”
While visiting the shanty town, he met a wonderful Mexican nun called Sister Naomi who did extraordinary work with the poor. Michael Murphy at a birthday celebration in Peru

She explained that the locals did not even have enough money to build a soup kitchen so Michael said he was a civil engineer and would love to help. He built the first one for €700, returned six months later for some three months and eventually built 20 soup kitchens to cater for the almost 90,000 people in the area.
“I noticed that most people lived in mud huts, plastic roofs and bamboo walls, a few in brick built houses, so I began building houses based on the thatch ones back home.”

Built
He built three room houses for a couple of dozen families - mostly lone parents - and continued this type of work until 2007, when he was shocked by the number of disabled children in the locality. Many were abandoned and crawling around on their backsides.
“I began building a drop-in centre in 2007, and one of the happiest days of my life was when I came back to where I lived and who had come over to celebrate my 60th birthday but my daughter Ciara. I was elated!
As Ciara recalls: “I remember the first day we were brought up to Las Lomas, I was amazed at the reception Michael was given. People both young and old came from all over as word got out that Michael (aka Gringo Michaell – White Michael!) was back in Peru.
“These people were most welcoming to my friends and I and I have never come across people who are so hospitable in all my life.
“Once they were introduced they immediately expressed their gratitude for all the fundraising done for them and also spoke very highly of Michael and all the work he does for them.
“We were invited into their Community Dining Room where all the locals gathered around chatting and playing. The atmosphere was lovely and the people were so sincere.
“ Throughout our few days in Las Lomas we visited many dining rooms that have been built, ones currently under construction as well as temporary dining roms that people use when waiting on one to be built. Honestly some animals in Ireland have better shelters than what these people have for dining rooms.”
Both Ciara and her sister Michelle work with special needs children in Ireland and they have both been in Peru and remain a huge asset to their father’s charity work.
Michael and Anna had six children in total, but sadly she passed away in 2010. By 2011, he had built an even bigger drop-in centre and now some 100 children attend for therapy every week.
“Peru is divided between very rich and very poor,” he explained.
“The government don’t help us and initially, I used my own money to get things started and have relied on fundraising in the main since.
“People can be extraordinarily generous...one donor whom I didn’t know gave us €10,000 and a Northern donor gave £3,500. There’s not tuppence in it for me, that was never the motivation… I just love the people.”
And they love him...in equal measure.
Still a towering six foot six, Gringo Michael is considered a veritable giant in a country where the population is small...poverty being a major factor.
He still visits Peru annually. “I used to go twice a year for three to four months but the charity is in good hands. I’m 71 so I get to visit once a year now.”
If any reader is interested in volunteering, donating or fundraising, you can find out more on Facebook, or email peruchildrenscharity@gmail.com.