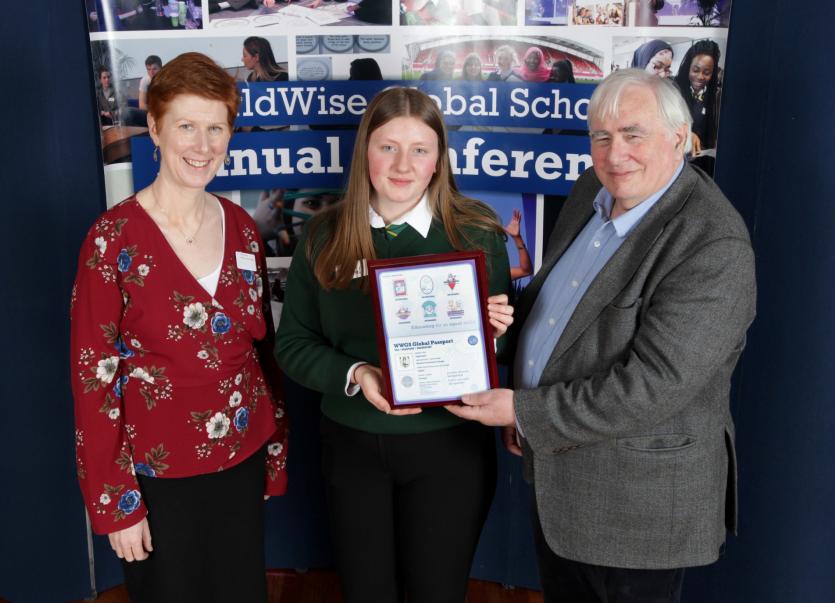 Moville Community College was awarded the WorldWise Global Schools Diplomatic Global Passport in recognition of their work in the area of global citizenship education.

Global Citizenship started up ten years ago in Moville Community College as an extra curricular activity. From then, it has branched into all areas of the school life in Moville. It is evident throughout every corridor, classroom, green area, school magazine, and local papers and from a stroll around the school. Moville Community College champions all aspects of Sustainable Development and they look forward to expanding these projects into the future. Students have focused in particular on issues relating to equality, fair trade and climate justice. Says WorldWise Global Schools Director, Aishling McGrath.

Rachel McCourt and Colleen Cooney from Moville Community College pictured here were amongst 320 people from 60 secondary schools gathered recently in Croke Park for the 6th annual Irish Aid WorldWise Global Schools conference ‘Connecting for Change’, where 34 of the schools were awarded WWGS Global Passports for their commitment to making the world a better place.

The conference – led by its MC, TV presenter Philip Smyth – consisted of school exhibits, interactive workshops, plenary discussions and was topped off at the end of the day with the students having a mini-protest on the issues they are concerned about such as climate change, the need to reform the direct provision system, trade justice and many other issues.