Many are expected to travel to Glencolmcille 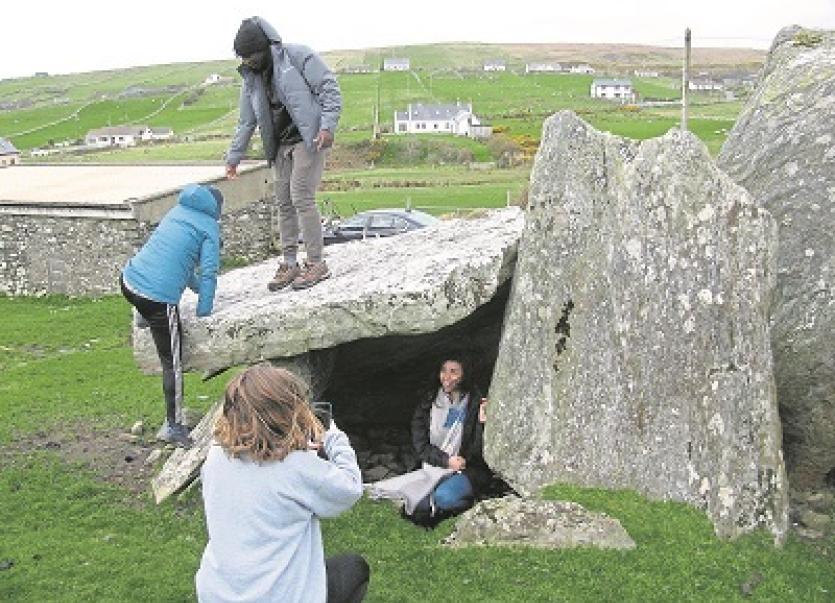 Gleann Cholm Cille and the nearby valleys in southwest Donegal contain some of the most intriguing prehistoric and early historic structures in Ireland.

The old glen
Monuments from the early Neolithic period onwards are dotted across this beautiful and informative landscape; among them the huge dolmens at Malinmore and the great court-tombs: Clochán Mór and Farranmacbride. The previous name of the valley – Senglenn ('the old glen') – was very apt.
However in medieval times, around  AD500-1600, that name was changed to honour one of Ireland's best-loved saints, Colmcille (in Irish) or Columba (in Latin).

Legends and folklore claim that the saint, Naomh Colmcille, (c.AD520-593) came to the valley and founded a church there. An important legacy of that process of Christianisation is the surviving cluster of stone cross-slabs (some probably dating to around AD800) and other early ecclesiastical features in the valley. Another legacy is the famous Turas ('pilgrimage') made around those sites; primarily on 9 June, the day the saint died – his feast-day.

Summer school
The Summer School, based in such an appropriate location, is aimed at adults with an interest in the archaeology and ancient history of Ireland. No previous knowledge is required; merely a curiosity and a willingness to participate in outdoor sessions, studying the evidence of the monuments in their landscape context. The course also provides an introduction to the archaeology of Ireland in general.

The sites to be visited raise a number of sub-themes which will be pursued also in the discussions and lectures: (i) how the visible landscape is a 'text' to be read; (ii) the process of 'conversion' by which pagan Celtic Ireland became a vibrant Christian culture; (iii) the ethical and practical problems associated with the conservation and 'restoring' of ancient monuments or leaving them as 'ruins'; and (iv) the degree to which the archaeology of the ancient world contributes evidence to the current debate on climate change.

Sites
Normally, day-time sessions will be held outdoors at the monuments and, on one day, there'll be visits to sites in another part of Donegal. There'll also be a number of evening background lectures – and, of course, time to enjoy the other attractions for which the glen is famous.

Dr Brian Lacey
The 2019 Summer School from July 27 to August 3, will be directed by Dr Brian Lacey who has been researching the archaeology and early history of Counties Donegal and Derry for over 40 years. A former university lecturer and museum director in Derry, he oversaw the archaeological survey of Donegal (1979-83). His particular specialism is the lore of St Colmcille. He has published 14 books and many research papers.
For more see a newly developed website www.colmcille.org