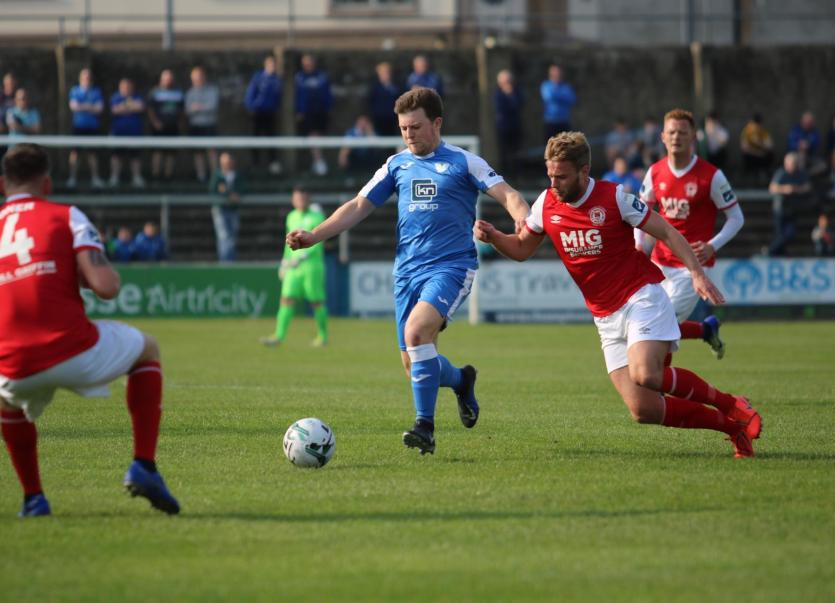 Finn Harps’ Premier Division  troubles continued on Bank Holiday Monday evening as they lost out to a more clinical and slicker St. Pat’s at Finn Park.

It’s a tenth league defeat on the bounce for a Harps side who could have few complaints about this result as St. Pat’s were worthy winners of an open contest.

In fairness to Harps, they played well in this game and created some decent chances of their own.

But after trailing 1-0 at the break, they couldn’t capitalise on a single one of the many good openings that came their way after half-time.

And when they conceded a second from the penalty spot on 69 minutes, it always looked beyond them.

That goal scored by Mikey Drennan arrived at a crucial stage of the game when Harps were themselves threatening an equaliser. Added to the opening goal on 37 minutes scored by Conor Clifford, it was enough to ensure victory for Harry Kenny’s side.

As has been the case so often this season, Ollie Horgan was forced to reshuffle his pack with injury ruling out goalkeeper Ciaran Gallagher who lasted less than a half an hour before suffering a shoulder problem in the defeat at Dundalk on Friday night.

His place in goal went to Peter Burke while Sean Boyd also returned to the starting eleven in attack. Harps also changed their usual 5-3-2 formation, going with four at the back. That allowed more of a presence in the midfield sector where Tony McNamee was particularly prominent in the early stages.

It was from his delightful through-ball that Harps worked the game’s best early chance but Nathan Boyle, despite being in on goal, delayed too long on the ball and the retreating Ciaran Kelly was able to block.

St. Pat’s welcomed Kevin Toner back into the centre of defence in place of the suspended David Webster in the only change from the team that played so well in their 2-1 home victory over Sligo Rovers.

Having been held at home by Harps at the beginning of the season, St. Pat’s won’t have been taking anything for granted from this visit to Ballybofey - but they were the better side in a first half that served up plenty of goalscoring opportunities.

Most of those chances fell the way of the visitors with midfielder Conor Clifford striking from distance against the inside of the post on 27. A minute later, the same player was in on goal only to be denied by a wonderful diving save from Burke.

But Clifford did eventually make the breakthrough on 34 minutes. He was picked out on the edge of the box by a Rhys McCabe corner and Clifford controlled the ball before unleashing a brilliant drive through a crowded goalmouth and into the bottom corner.

Harps started the second half well and after chances for Sean Boyd and Mark Coyle, Nathan Boyle was again presented with a great opportunity after a brilliant run and pass from McNamee. But Boyle again passed up the chance with Lee Desmond getting back to block.

St. Pat’s had chances too as the game began to open up. Gary Shaw saw an effort saved by the legs of Burke just before the hour and then Mikey Drennan drove wide from a good position.

Mikey Place came on for Boyle on the hour as Harps looked for some sparkle in attack.

But they conceded again on 69 minutes when Keith Cowan was penalised for a clumsy foul on Gary Shaw just inside the box and after Paul Hegarty was sent to the stands for taking his protests too far, Drennan converted from the spot.

After that.St. Pat’s saw the game out to claim the points and close the gap on fourth placed Derry City above them.