Eamonn McConigley's side end their season with cup silverware 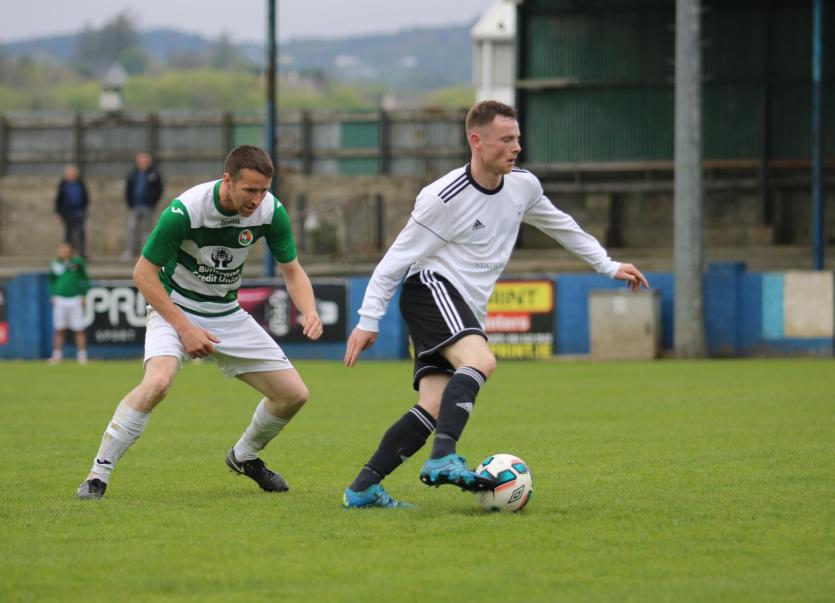 BJ Banda was the cup hero for Letterkenny Rovers as he struck twice in the final ten minutes to help his team to League Cup victory at Finn Park on Sunday afternoon.

The result brings an end to a wonderful run of cup victories for Cockhill Celtic. They were attempting to win a seventh Donegal News-sponsored USL League Cup in a row, but Banda’s two late goals meant it was Rovers’ day.

With the sides level at 1-1, this tie was delicately poised going into the closing stages and if anything Cockhill looked the more likely to win.

But Banda got on the end of a wonderful flowing move on 81 minutes to hammer the ball past Stephen Conroy. Then deep in injury time, Conroy saved a Lee Toland free-kick but Banda followed up to score from the rebound.

It was the perfect way for Rovers to round off their season, having run Cockhill so close in the league for so long.

Cockhill, without the injured Laurence Toland who broke two ribs in last weekend’s title winning victory over Finn Harps Reserves, went with Bart Wesolowski in attack and Gerard McLaughlin in midfield in place of Marty Doherty.

The Inishowen men started well with Gerry Gill involved in so much of their early positive play and it was from his cross that Cockhill went close to opening scoring early on but Rory Kelly saved from Wesolowski’s header.

Rovers however, soon settled into their stride and Lee Toland, up from left back, produced a wonderful delivery which flashed across the face of goal.

It was an early warning for Cockhill and soon after, Toland’s quick-thinking from a free-kick saw him slip BJ Banda through on goal but the striker’s touch let him down and the chance was wasted.

But Rovers eventually made the breakthrough on 25 minutes. Banda was played through on goal only to be brought down by keeper Stephen Conroy and Toland stepped up to hammer home the resulting penalty.

Cockhill soon regained their rhythm and from then until half-time, they were the side on top. Brendan McLaughlin and Mark Moran were seeing no end of supply on either wing while Gill and Gerard McLaughlin began to gain a strangle-hold in the middle.

Gill was inches away from equalising on 38 minutes when his wonderful free-kick from 20 yards bent around the wall only to come crashing back off the inside of the post.

Gill was cursing his luck again just before the break when he was denied by the woodwork for a second time - on this occasion from the penalty spot after Mark Moran went down under the challenge of Rory Kelly in the box.

Compared to the game’s first penalty, this was less clear cut, but referee Marty McGarrigle was close at hand to award the penalty. Unfortunately for Cockhill, Gill’s spot-kick was pushed up onto the crossbar as Kelly made a quite  superb stop and Rovers went in at half-time with a one-goal advantage.

Cockhill started the second half well but frustratingly for them, they carried little threat in front of goal. Rovers, however, suffered a major blow just after the hour when they lost the influential Conor Tourish to injury. He was replaced by Christyn Connaghan with Chris Malseed dropping back into defence.

Banda might have had a quiet game up front for Letterkenny, but midway through the half he gave Cockhill a big scare when his run and shot from 25 yards drew a fine diving save from Conroy.

It was an important stop - and a big moment in the game, because on 70 minutes, Cockhill got themselves back on level terms. Rory Kelly misjudged a Gill corner and while Wesolowski’s looping header dropped back off the crossbar, Jimmy Bradley was on hand to turn the ball home.

But with Cockhill threatening a second,. Letterkenny broke to go back in front on 81. Jonny Bonner and Ryan Lonergan created the opening with Lonergan’s cross finished to the net by Banda.

Then in injury time Banda’s third sealed the deal for Rovers.