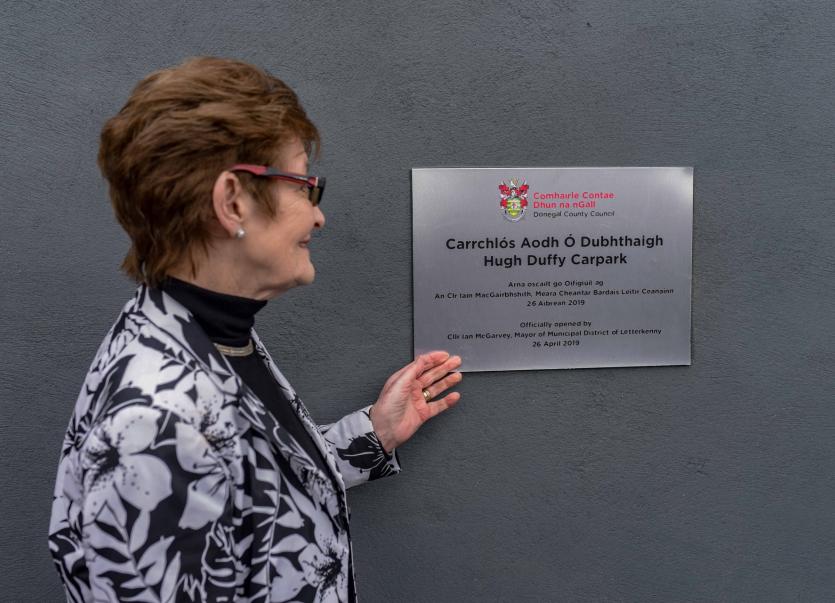 Mrs Elaine Duffy, wife of the late Hugh Duffy, pictured at the official opening of the Hugh Duffy Car Park in Letterkenny on Friday

The family and friends of the late Hugh Duffy came together with the elected members of Letterkenny Municipal District on Friday afternoon to mark the official opening of the car park named after Mr. Duffy by Mayor of Letterkenny MD Cllr Ian McGarvey.

The car park which is known locally as the ‘Old Mart Car Park’ was renamed to honour one of Letterkenny’s most well known residents the late Hugh Duffy. Members of the Duffy family, pictured with friends and special guests at Friday's opening of the new Hugh Duffy Car Park

Hugh Duffy, who passed away in December 2014 aged 85 years, lived in nearby College Row where his wife Elaine still lives.  He was a native of Galway and came to work in St. Eunan’s College where he taught Latin and History.

He took a great interest in the ongoing development of Letterkenny and played an active part in keeping the site in Council ownership.  A motion was passed by the Members of the Letterkenny MD in October 2018 to name the car park in his memory.

Speaking at the official opening Mayor of Letterkenny MD Cllr. Ian McGarvey said: "It is a fitting tribute to name this car park in honour of the late Mr. Duffy and I am delighted that his wife Elaine is with us today to share this special occasion.

"Mr. Duffy made Letterkenny his home and contributed so much to life in the town from being a teacher in St. Eunan’s College to his work in the community. Mr Duffy like so many other people in Letterkenny, gave his time and effort generously for the betterment of others and I am delighted to be here today as Mayor of Letterkenny to honour Mr Duffy in this way.”