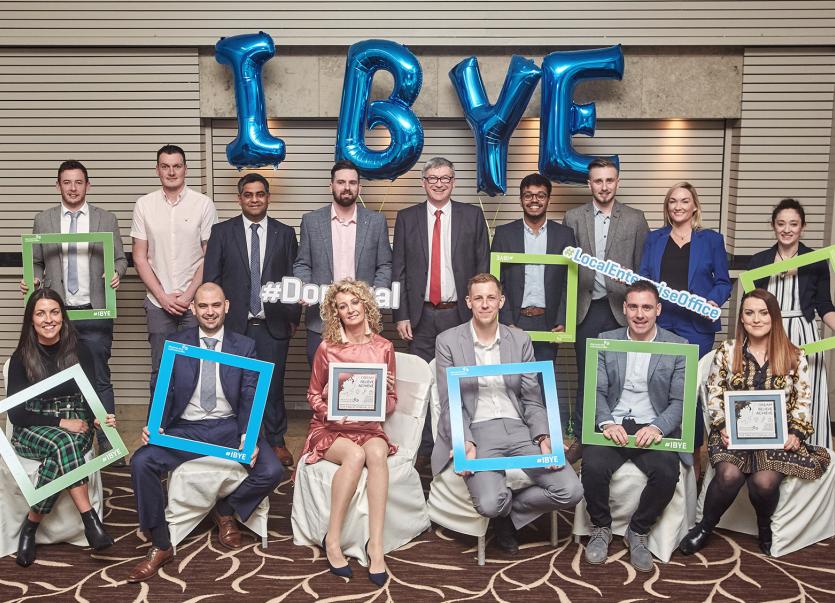 Ballybofey businessman Martin O’Reilly, has said he was absolutely delighted to have been named overall winner of the Donegal final of Ireland’s Best Young Entrepreneur last week.

The former Donegal GAA player was also winner of the best start-up business category at the 5th annual awards held in the Radisson Blu Hotel, Letterkenny. Speaking after the awards, Martin O’Reilly who runs O’Reilly Sports with his brother Steven, said he was absolutely thrilled.

“I am absolutely delighted to have won Ireland’s Best Young Entrepreneur of the Year Competition in Donegal. I really want to say a huge thank you to all our customers who have been with us from the beginning. Without you, this would not have been possible.”

O’Reilly’s Sports based in Ballybofey was founded in October 2017 by Martin and Steven O’Reilly. In the last year, they have designed and manufactured a vast range of personalised and bespoke clothing from playing gear, to leisure wear and workwear for over 100 clubs, businesses and organisations throughout Ireland and the UK with the a focus on quality and service.

Runner up in the start-up category was Inishowen’s Laura Bonner who co-founded The Muff Liquor Company in 2017. They produce award winning premium, distilled spirits and launched their flagship product Muff Irish Potato Craft Gin in 2018.

The Best Established Business category was won by Letterkenny businesswoman Siobhan Boyle of Sculpt Cosmetics who offer customers the very best in make up and beauty through three divisions; retail website, physical store and a training academy. Kilcar’s Catriona McGinley of Orwell and Browne, an Irish heritage brand that manufactures and supplies Donegal tweed products worldwide, was runner up in the best established category.

Winner of the category for the best new business idea was Rakesh Kumar from Donegal town. Rakesh is the founding CEO for ÉireChem who develop and produce safe, competitive and sustainable products for the life sciences and innovative technologies.

Carndonagh’s Paul McLaughlin was named runner-up in the best new idea category with his idea to produce hypoallergenic infant milk formula in Donegal for babies and young children suffering from cow’s milk intolerance due to the protein composition.

Head of Enterprise in Donegal, Michael Tunney not only congratulated all of the winners and finalists, but also had words of praise for all 56 applicants to the Donegal competition this year.

“The objective of this national competition is to develop the skills and capacity of these young entrepreneurs and progress the potential of these small and micro enterprises. These enterprises and individuals play a vital role in our economy, both locally and nationally,” he said.

The Donegal winners will now progress to represent Donegal at the Regional Finals to be held in Leitrim in June.