Donegal hurlers play well, but lose out against Wicklow 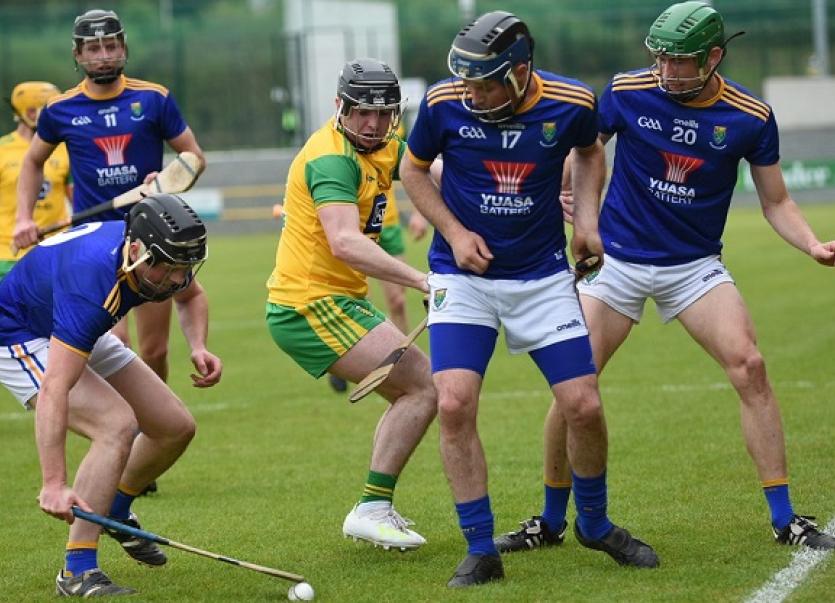 So close and yet so far!

Weakened Donegal hurlers came heartbreakingly close to pulling off what would have been one of their greatest victories in the biggest ever hurling championship match played on Tír Conaill soil.

They dominated a physically superior Wicklow for long periods in the opening half and finished very strongly after being hit two heavy blows early in the second half.

For, killer goals in the space of three minutes effectively ended battling Donegal’s interest in this well contested affair before a disappointingly small crowd in O’Donnell Park, Letterkenny.

Absent star Declan Coulter could only look on in obvious frustration.

“The boys just worked so very hard in the absence of so many quality players and they gave a really great account of themselves," Coulter said.

“It was one that got away and maybe we were lacking that wee bit in the last quarter and Wicklow are a good side are always going to put you under pressure.

“So you will be heavily punished if you make mistakes.

“Those two goals were killers, a wee bit of luck on their part and a wee bit of a lapse of concentration on ours.

“We are proud of the way we worked, but disappointed with the result”.

For, this was the biggest ever game played on Donegal soil.

Wicklow corner forward Gary “Flash” Hughes pounced in the 38th and 40th minutes when he benefited from the long ball and finished to the net as the Tír Conaill defence nodded off briefly.

But this was a perfect platform for the Garden County who held off a spirited Tír Conaill rally in the final quarter.

A series of pointed frees from Ciaran Matthewson left Wicklow leading by a mere two points on a score of 3-11 to 1-15 four minutes from time.

But, Matthewson missed two scorable frees and young Dillon Duffy dropped a shot short before Wicklow got the insurance goal when a free rebounded off the upright into O’Neill’s hands and he had the simple task of tapping the sliotar to the Donegal net.

Despite their considerable absentees, Donegal dominated the opening 26 minutes and were well worth their 1-6 to 0-2 lead

Lee Henderson was on fire and hit all but one of their first half scores.

But they were rocked by a snap Wicklow goal when wing forward Eoin Mc Cormack strode through the centre of the Donegal defence and found the predatory Hughes on the edge of the square.

And the clever corner forward, who finished with a hat-trick had an easy task of finishing to the net.

Wicklow added a few frees from marksman Christopher Moorehouse and went in just two points behind the home side.

Donegal had a dream start when they rattled the net after just three minutes courtesy of impressive full forward Lee Henderson.

Henderson gathered a long free from Danny Cullen and made his way through a phalanx of defenders before booting the ball to the Wicklow net.

The visitors looked stunned and Henderson underlined this advantage with a well struck free to put the home side into a 1-1 to 0-0 lead after five minutes.

Wicklow responded through Moorehouse in the 5th minute, but that was to be their final score for another 20 minutes as the hard-working home side won the breaks around the middle and Henderson was accurate from frees.

Dillon Duffy had a half chance of a goal,but blazed the ball over the bar from point blank range in the 28th minute.

But, a lapse of concentration for about five minutes on the resumption, was to cost them dearly.