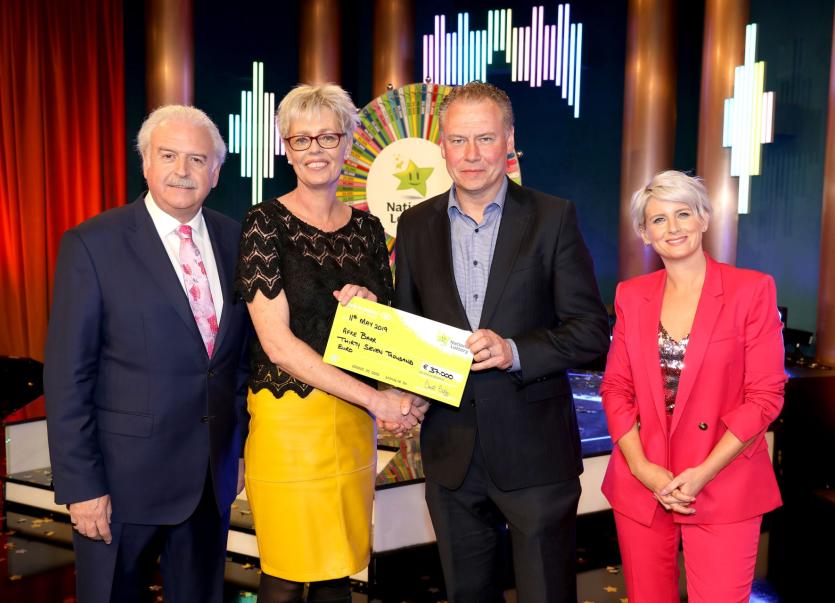 A Dutch woman, living in Donegal won €37,000 when she appeared on the National Lottery Winning Streak TV game show on RTÉ One last Saturday, May 11, just months after a fire almost destroyed her family business.

Afke Barr from Buncrana was the latest Donegal person to make an appearance on the popular TV game show. Her Winning Streak game got off to a flying start when she won an electric car, Renault Zoe, worth €25,000 on the very first game. She went on to scoop a further €12,000 in cash from the show.

Afke is originally from the Freisland in the Netherlands but has lived in Donegal for 30 years. Afke moved to Ireland and at first spend time travelling around the country. She met her husband John in Listowel at the All Ireland Fleadh and got married in the years that followed and now 33 years later the pair have two daughters in their twenties, Caoimhe and Orla.

Afke’s Winning Streak appearance is a result of an unfortunate tragedy following a fire at their business premises in Buncrana which saw the ‘John Barr’ Drapery store burn down last February. Thanks to help from the Buncrana community, the business shortly reopened at another premises and a good luck card containing a lucky Winning Streak ticket was the one which was pulled out by Winning Streak presenters Marty Whelan and Sinead Kennedy two weeks ago.

There was an outpouring of emotion from all in Buncrana who were delighted to see Afke being called to appear on the show and she has had incredible support from the entire community who were cheering for her in living rooms across the town last Saturday.

Afke was surrounded by her close friends and neighbours in the RTÉ studios on Saturday evening and was delighted with her family’s change of luck following the fire.

Winning Streak will take a week’s break due to RTÉ Eurovision coverage and will return to RTÉ One on Saturday, May 25, where five more players from all over Ireland will get the chance to play for huge cash sums, holidays and cars.