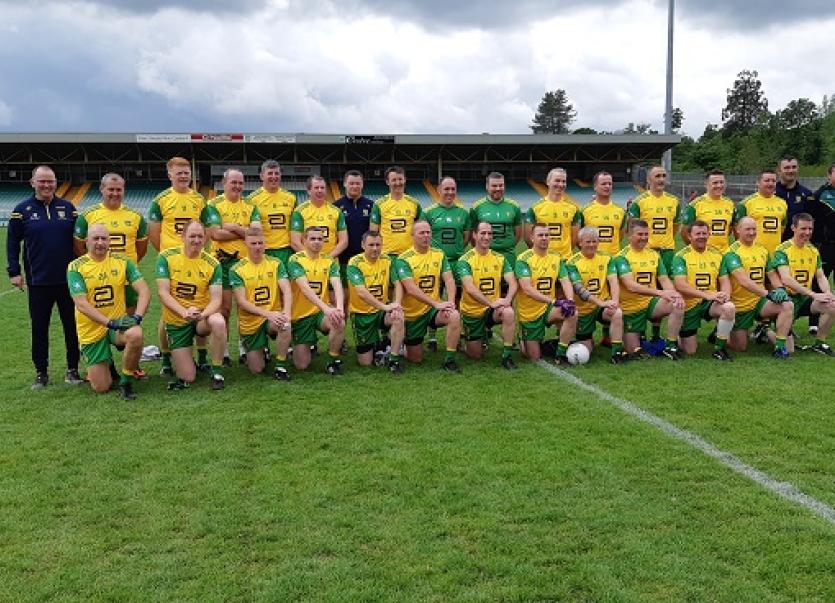 Donegal Masters pictured before their game against Down

Donegal Masters got their second win of the campaign with a deserved win over Down in MacCumhaill Park, Ballybofey.

A magnicently crafted and finished goal in the 41st minute by Liam McGroarty was the big turning point, although Donegal were never headed against a Down team that hit some bad wides.
Donegal also had a number of missed chances, but overall they will be happy. They had former Naomh Columba man Gerry McGill in goals for the first time while Charlie Doherty, Sean McDaid, John Haran, Liam McGroarty, Paul Gallagher, Sean Boyce, Michael 'Sticky' Ward and John 'Brockagh' McFadden were to the fore in the win.
Donegal had the majority of the possession in the opening quarter but scores were at a premium. They could have had a goal on three minutes when Kerry Ryan and Michael 'Sticky' Ward combined to put John Haran through but he hit the sidenetting.
Sean Boyce got Donegal on the board on six minutes and Paul Gallagher added a second two minutes later.
Michael 'Sticky' Ward converted a free after Kerry Ryan put Liam McGroarty through. He got the ball first but was then tripped.
Good work from Sean McDaid saw Sean Boyce have Donegal four ahead on the 12th minute, but they had to wait until the 27th minute for their next score
In between Down really came into the game with Patrick Bradley especially to the fore, knocking over two points.
Close to half-time both sides had bad misses from frees before Donegal should have had a goal three minutes from the break. A high ball from Dermot Slevin was broken by John Haran and it seemed all Gary McGinty had to do was fire to the net but he somehow pulled his shot over the crossbar.
Half-time: Donegal 0-5, Down 0-3.
Michael 'Sticky' Ward increased the Donegal lead four minutes into the second half and even though Down hit back with a free, Donegal were 1-8 to 0-4 ahead by the 40th minute.
Michael Canning and Sean Boyce (after great work by Haran, John 'Brockagh' McFadden and 'Sticky' Ward).
Then came the Doengal goal which was very well created. John Haran was at the start of the move and he combined with 'Sticky' Ward before releasing Liam McGroarty to find the corner of the Down net.
Down did hit back with a few points but another free from 'Sticky' Ward after Vincent Kennedy was fouled and a a brilliant point with the outside of his left by Dermot Slevin left Donegal ahead by 1-10 to 0-7 with eight minutes left.
Michael Ward added another Donegal free while Down went for goal but they looked like they would get no change out of the Donegal defence but a late free found its way to the net for the final score.