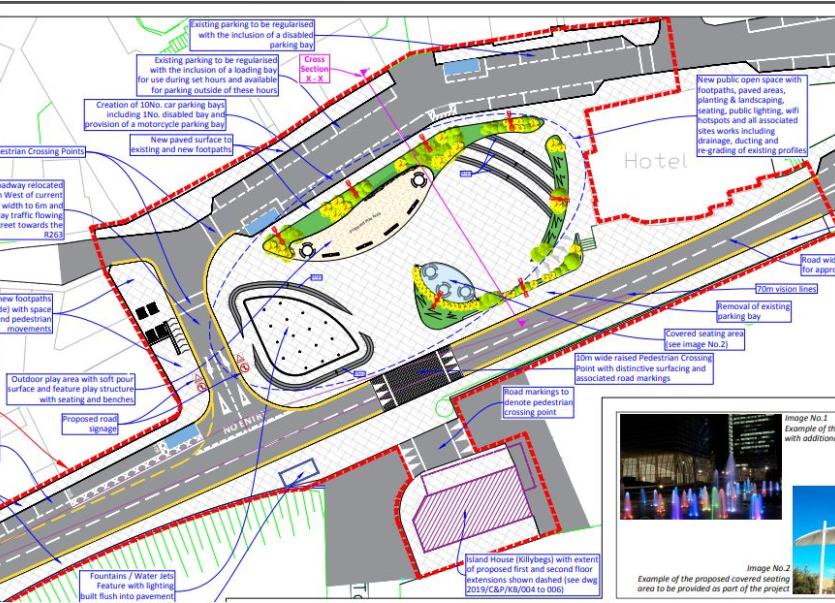 Pans have the potential to transform and regenerate Killybegs town centre

New plans for the re-development of Island House in Killybegs have been published by Donegal County Council’s newly formed Regeneration and Development Team.

These plans have been published on the Council's website www.donegalcoco.ie and a public information event is being held on Thursday next in the Bayview Hotel Killybegs from 2 to 8pm.  Plans are also available for viewing in the County House, Lifford and in Donegal Public Services Centre.

These exciting plans for place-based transformation and urban regeneration interventions in Killybegs seek to support the growing tourism sector in the town through the reuse of the Island House as a tourism facility.  This will include the development of a Digital Hub in Island House supporting further business, enterprise and innovation in Killybegs.

The Island House re-development is also supported by the proposed transformation of the existing public car park at the Diamond to a civic space which will regenerate the area, encouraging visitors and residents to spend more quality time in the town centre.

Paul Kelly, Senior Executive Planner with Donegal County Council believes that these plans have the potential to transform and regenerate Killybegs town centre and is keen to hear from those interested in these developments saying “we have been working closely with a number of stakeholders in the community in the development of these plans and we are keen to engage further with the community.  We believe that these plans have the potential to support the future development of the tourism sector in the town and to capitalise on the growing visitor numbers to Killybegs and the surrounding area.”

The plans and particulars are currently on display and available for inspection at Donegal County Council offices in the County House, Lifford and in the Public Services Centre in Donegal Town during office hours until Tuesday 18th June 2019.

Submissions in respect of the development may be made in writing before 4:30pm on Wednesday 3rd July 2019.