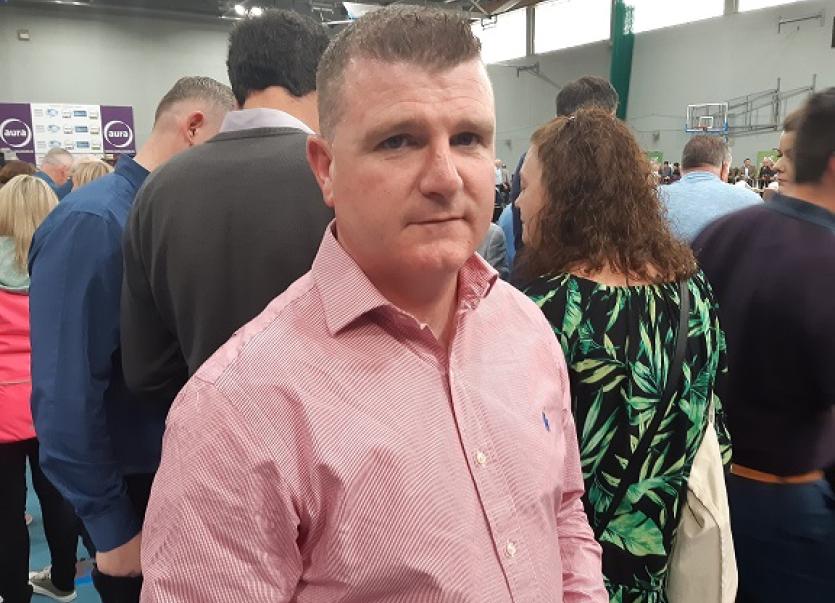 John O'Donnell at the sorting of votes in letterkenny

Independent councillor John O’Donnell, who is on course to top the poll in the Milford LEA, has declined to give an interview to RTÉ at the sorting of votes in Letterkenny.
Obviously aggrieved at the station’s RTÉ Investigates programme which led to the Standards in Public Office Commission (Sipo) finding against him in a probe into breaches of ethics legislation, he refused to be interviewed.
Speaking to RTÉ’s north west correspondent Eileen Magnier he said: “We are here to celebrate here with our families so if you want to come again on a witch hunt that’s fine.”
Speaking to Donegal Democrat he clarified the conversation with the RTÉ correspondent.
He said it was not a case that he was not happy to speak to RTÉ but he had invited RTÉ Investigates reporter Conor Ryan to the count centre to interview him.
“I just said that I had invited him to come along here today to the Aura Leisure Centre and I said there was no point in me doing an interview with her as I had offered Conor an interview here today and I am disappointed that he is not here.”
He said he wanted to continue “with the good work that I have been doing”.
“At the end of the day the people have spoken,” he said.
“I did say that I would speak today and now that the people have spoken. Everybody that knows me and knows me well knows the real John and knows all the good I have done.
"And I apologise here today to anyone that does not know me because of the five minutes that they saw of me going in as a businessman and being entrapped and showing to do something wrong. I apologise for that and I have learned from it and I just want to move on now.”

Sipo probe
Cllr O'Donnell was probed by SIPO after he appeared in an RTÉ Investigates programme broadcast in November 2015 in which he was secretly filmed having discussions with an undercover reporter purporting to be proposing a wind farm project.
The investigation found against Cllr O’Donnell in respect of all three of the alleged contraventions.
He said following the publication of the report that he would be judged by the electorate in the Milford area.
Tallies show he has topped the poll.