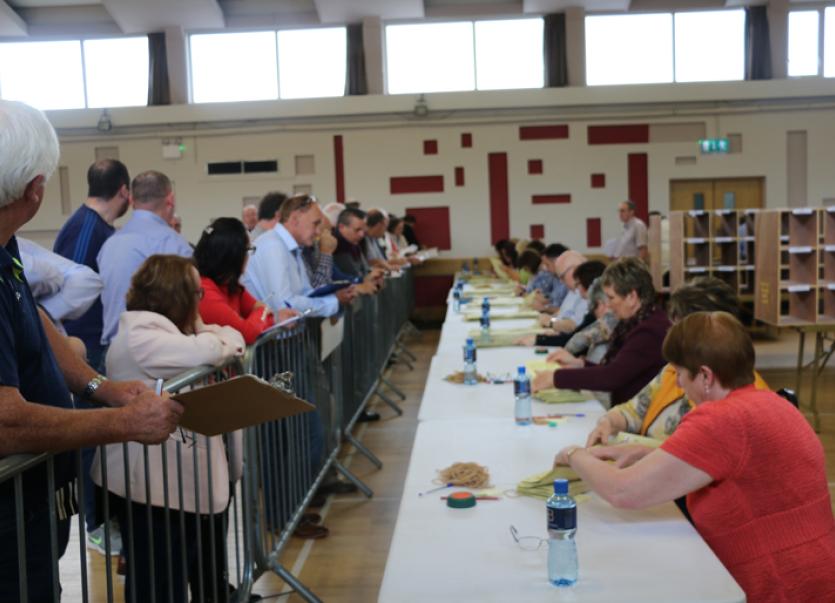 Counting is underway in Donegal town where a second day of counting has been predicted. Picture: Matt Britton

The counting of votes is underway at the St John Bosco Centre in Donegal town for the Donegal local electoral area.

Nineteen candidates are vying for the six seats and candidates and their election teams are predicting a second day of counting.

The quota is expected to be over 1,900 and the nearest to that is Noel Jordan (SF) who the tallies took 1,460 first preferences.

Fine Gael candidate John McNulty is pushing for a second seat for the party on 1,039 while his running mate John Boyle has 757.

After that,  several candidates are close together making the last two seats hard to call.

Sitting councillor Seamus Maguire (Ind) is on 707, Billy Grimes (Ind)  is on 864, Michael McMahon (SF) is on 828 while Donegal town Independent Pauric Kennedy is on 738.

There looks like a real battle shaping up for the last seat which could be a fight between Donegal town man Tom Conaghan and Seamus Maguire.

Fianna Fáil ran four candidates and last night the party’s director of elections for Donegal Brendan Byrne conceded there will be no second seat in the Donegal LEA.

Micheál Naughton, who replaced the late Sean McEniff, is down around 500 votes on his predecessor.

There is growing confidence in Fine Gael from the tallies that they can take a second seat with John McNulty.

Noel Jordan increased his vote by around 400 votes the tallies show while  Niamh Kennedy’s vote looks to have dropped around 300 votes.