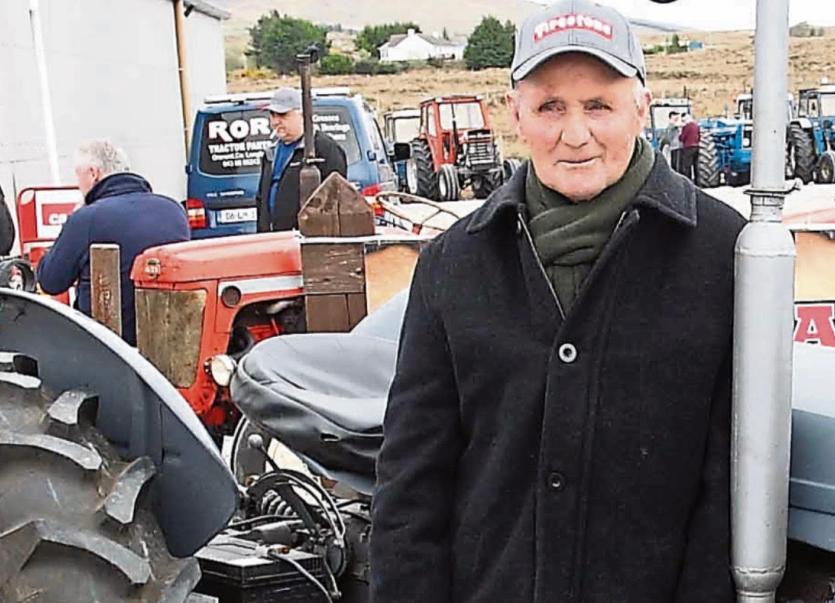 On Easter Sunday, John Rodgers, 85, led over 100 tractors in a charity run from the picturesque town of Glenties to the seaside village of Maghery.
What many people did not realise was that the tractor John was driving was older than many of those who followed him along the meandering roads.
The tractor that the island native was driving was the first of its kind in the Rosses when he bought it for £596 in 1954, from the Mahon Brothers in Milford, which was costly at the time.
At that time, you could buy a grey TVO for £460.
There were a number of petrol tractors in the Rosses area at the time but there were no diesel tractors which would be less costly to run.
The diesel worked out at 1.3 shillings and three pence a gallon.

Rich History
The Ferguson Grey Diesel belonging to John has a rich history; this was the vehicle that John used to bring turf home to many in Dungloe and surrounding areas when times were difficult.
John has an exceptional memory and can recall the homes he visited in the area during that era with clay, sand and turf. Later John was employed by the council under the auspices of the Land Commission, the young man carved roads out across the Donegal landscape.
Much of the work was carried out over bog land. He spent three winters in Leitirmacaward and acutely recalls the work that he undertook there: “The roads were made by tractor. You reversed on and dumped the gravel. You soon became a very good driver.”
At that time the pay was 7 shillings and 3 guineas a day for the tractor. There was a heavier tax for the tractor and many opted not to do the work. However, John was born from a family which had a strong work ethic and continued to work where and when work presented itself.

Island Life
John was born on Iniskerragh Island in March 1934. The son of Nora and Phil Rodgers he had three brothers and four sisters, one of whom is his twin Mary. Growing up on the island cultivates a great strength of character in people and John certainly exemplifies this trait.
When John was 19 years of age, he went to the north of Scotland and worked as a miner in some of the most grueling and trying conditions imaginable. The team of miners worked 12 hours a day.
At that time 150 pounds of gelignite would be used intermittently to blast in the underground tunnels. The men would step outside for ten minutes when these explosions took place. John recalls that the fumes were difficult to contend with: “There was no ventilation, no union, conditions were dire. Miners were paid 3 shillings and seven pence an hour,” he recalled.
A huge fan sat at the mouth of the tunnel but no fans stood within the tunnel itself. They stayed in camps. Sixteen beds faced 16 beds in the long dormitory-like rooms and on arrival they were handed three army-blankets each. A subsistence of £2 and 10 shillings saw the men get free meals and a few sandwiches.

Target
The hard rock mining teams would alternate shifts, the first team would work five days a week and the following week they would work six days. John sent money home alongside his letters every week acknowledging the great support his parents afforded him and his siblings.
“There was a target for the gangs to get a 100 foot into the tunnel every week. We always got our target,” John said.
For many years later, John and his trusted tractor were called to many areas to blast and drill rock, a trade which few were used to. John worked hard in Scotland and bought a tractor which changed the face of villages across the west of Donegal.
Today John is proud to say that his tractor works perfectly and is still in use. The grey tractor takes pride of place on the street outside his home in Glenties. John took great care of his tractor which has, over the years, achieved so much for so many.