Lara is off to meet the president 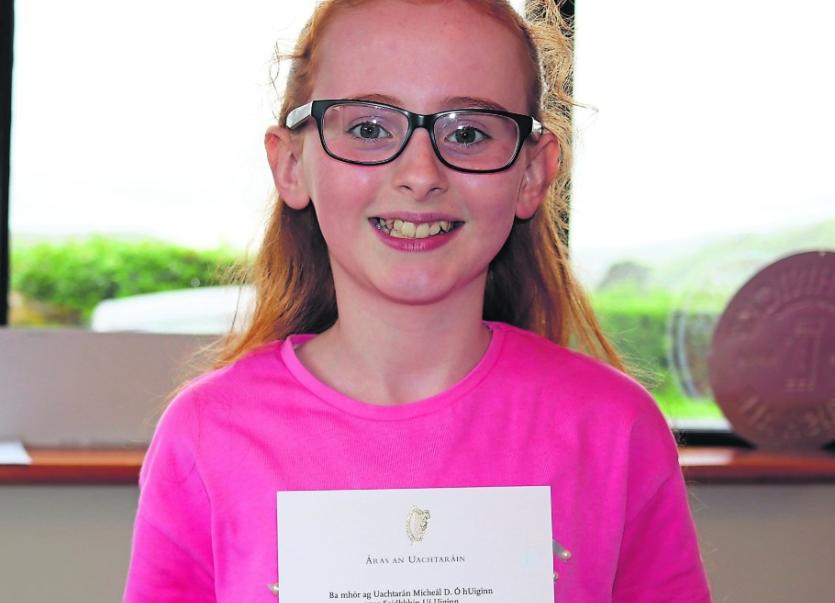 Lara with her invite to Áras an Uachtaráin

A Donegal schoolgirl is looking forward to a dream visit to Dublin this weekend to spend the day at Áras an Uachtaráin as one of a handful of guests personally invited to meet the president.
“It’s a dream come true! I’d like to be the president some day!” said little Lara Murchan, the ambitious ten year old from Fintra, Killybegs.
So just how do you go about making your dreams come true when you’re still at national school? For Lara, it required nothing more than sitting down and writing a letter. Lara’s letter to the president

“I wrote my letter to the president last November and I asked could I come and meet him,” said Lara, currently in 5th class at Fintra National School. “I got a reply thanking me for my letter and they said they would keep it on file and get back to me.”
And that was the end of it, or so she thought. Because last week, seven months later, another letter arrived, a letter with the same presidential harp stamped on the envelope.
“I knew it was from him when I saw it!” said Lara. “I opened it carefully and read it and then showed it to mammy!”
Lara, accompanied by her big sister, Glanna, and her parents, Alan and Evelyn, will be attending this year’s Family Day Garden Party on Saturday. As well as looking forward to a tour of the presidential house, she also very much hopes to meet Michal D’s two dogs, Bród and Síoda. For Lara, the pen is most definitely mightier than the email!