PAT'S PATCH: What happens when you don't vote 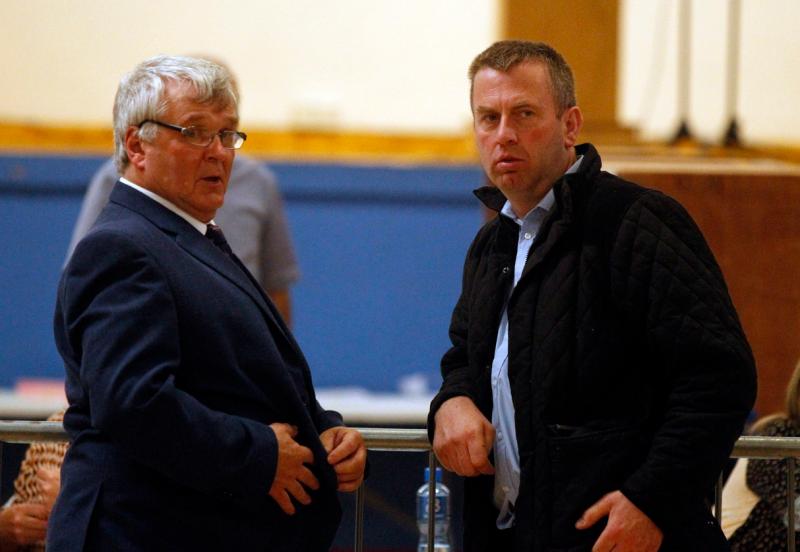 Gerry Crawford and Liam Doherty having a chat during the count in the Lifford-Stranorlar Local Electoral Area. Pat McArt has had his fill of count centres at this stage. PICTURE: BRIAN MCDAID

If you had the choice of a) watching paint drying b) sitting tied to a chair forced to watch cricket or c) going to an election count, my advice would be to seriously consider the first two as the better options.
As I mentioned last week I had studiously avoided them like the plague for the best part of 30 years but now in the space of a couple of weeks I have attended three, the latest being the Euro count in Castlebar. All I can say is that I lost the best part of three days of my life in that Mayo town, three days I’ll never get back. What I was doing there is a long story I’ll keep for another day.
Things got that bad I found myself reading two day old newspapers, labels on coke bottles, beer mats, talking for hours to people I barely knew, googling the names of the Italian team that played in the 1970 World Cup final against Brazil– anything to pass the time.
But an election is a bit like a birth of a child – no one wants to go through the long drawn out labour but the end result can be very interesting.
Now three days later as I sit here this morning mulling over the results of both the European and local elections I have come to one blindingly obvious, totally unoriginal conclusion: the majority are not in the least bit interested in the things that don’t affect them directly. Einstein eat your heart out!
This was, in my opinion, a vote by the middle class for the middle class. As most middle class folks have private health insurance the trolley crisis doesn’t affect them. Homelessness is not an issue either. And while some might be in negative equity, house prices are rising steadily so that shouldn’t really be an issue any more.
Farmers were also bought off with the sweetner that there would be a €100m. pot to ease their pain. The fact that this was announced just the week before the election was a bit of a master stroke.
And, as I alluded to last week, it would seem bad press is no barrier to success either.
Frances Fitzgerald was castigated for her role in the Maurice McCabe affair - we still don’t know what she did or didn’t know during her tenure as Minister for Justice - but had no bother taking a seat in Dublin.
Over in Tipperary there were no problems for those running under the Lowry banner getting elected. You can check out Michael Lowry’s record for yourselves. And the councillors who ‘starred’ in the RTÉ investigates programme of some years back topped the poll - or near enough – in their respective areas.
What does that tell us about ourselves? I’ll leave that one with you as well.

You a guarantee Fine Gael will be particularly pleased with the overall outcome of the elections. Usually the government party gets a bloody nose in mid term elections of whatever hue but not this time. Even in Midlands North West they took the seat held by outgoing Independent Marian Harkin.
The downside to this is that the plight of those on the margins of our society seems to be of little concern to the middle classes and to those in power.
There are growing numbers on trolleys and waiting lists at our hospitals. Homelessness is now almost endemic in certain parts of Dublin. Young people are finding it increasingly difficult to get on the housing ladder. Huge sums are being spent by government departments on projects costing billions but there seems little money to help those struggling in rural Ireland.
Even in busy towns like Castlebar as I walked about it I could plainly see the evidence of neglect – houses and shops derelict and abandoned. That scenario is pervasive, can be seen repeatedly anywhere you choose along the western seaboard.
In elections where almost half of those eligible to vote didn’t bother and where the turnout in the poorest areas was way, way behind the rest of the country it is only too obvious there is a lot of alienation, maybe even despair out there.
So it's a real pity they didn't get up off their backsides and do something to change that.