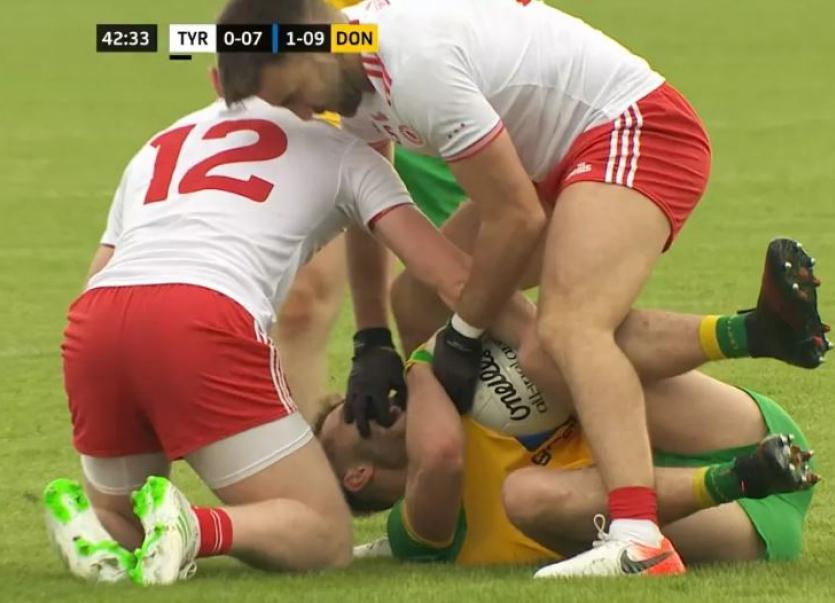 Tyrone player Tiernan McCann has been handed a proposed suspension for his part in the incident involving Donegal's Stephen McMenamin in the Ulster championship semi-final in Kingspan Breffni Park, Cavan on Saturday night last.
TV coverage of the game showed the incident clearly where McCann's hand was in contact with McMenamin's face and mouth and he also seemed to stamp on McMenamin's neck.
It is learned that the incident was dealt with by the CCC in Croke Park on Monday, as is normal for all games. The incident was not dealt with by referee David Gough at the time.
It is understood that a penalty has been proposed and communicated to the player involved. McCann will then have the option of accepting the proposed punishment or appealing it.
The incident overshadowed what was a great result for Donegal, overcoming their bogey team of recent years.
Donegal will now meet Cavan in the Ulster senior championship final on June 23 in St Tiernach's Park, Clones and it looks like it will be a sell-out.
Cavan overcame Armagh in their semi-final replay on Sunday at the Clones venue with Dara McVeety outstanding while veteran Cian Mackey again made an impact from the bench.
It will be Cavan's first Ulster final appearance since 2001 while their last Ulster title was in 1997, when they were bridging a gap back to 1969. Imagine back in 1969 Donegal had yet to win an Ulster title, but since then they have appeared in 20 finals, winning nine of them.
This year Donegal will be appearing in their eighth final in nine years, a remarkable statistic.
See today's Donegal Democrat for Fr Seán Ó Gallchoir's comprehensive record of Donegal in Ulster finals.