Donegal has lowest household income in the country 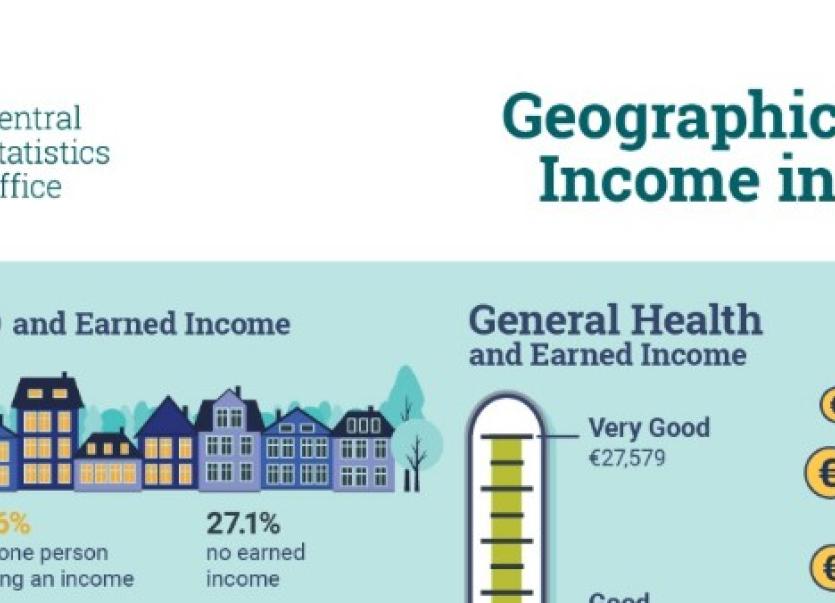 Households in Donegal have the lowest incomes in the country, new figures show.

Income is examined across the areas of housing, health, education, occupation and commuting.

Levels of income are impacted by many factors such as gender, general health, level of education and the type of work you do. The findings of this report show that beyond these factors place of work has a substantial impact on income.

Commenting on the report, Lianora Bermingham, Statistician, said: “The report shows that the median gross income for households was €45,256 in 2016 and ranged from €32,259 in Donegal to €66,203 in Dún Laoghaire-Rathdown.

"The report includes analysis of rent affordability based on the incomes of tenants and their rents as reported to the Residential Tenancies Board. This 'rent burden' varies from 16.2%-44.7% at Electoral Division level on this basis.

"The highest median earned income in 2016 was for the ICT, Scientific & Recreation sectors at €37,037 and about four euro in every ten earned by residents of Sligo, Leitrim and Donegal came from the Public Service, Education and Health sector.”

Commenting further on the report, Kieran Culhane, Senior Statistician, said: “This report is an example of the policy-relevant research projects that the CSO are developing as part of its leadership role of the Irish Statistical System. Our goal is to maximise the variety and volume of data available to provide high quality information to the Government, businesses and citizens.

Under the auspices of the Statistics Act 1993, the CSO is in a unique position to gather and link administrative data sources and evaluate their potential for statistical use. This project involved the integration of datasets held by Revenue and the Department of Employment Affairs and Social Protection with CSO held datasets to produce aggregated analysis and outputs at a detailed geographical level not previously available.

A detailed geographical breakdown of household income provides policymakers with information on households earning low to moderate annual incomes by area. This information is required to allow the development of polices relating to affordable housing, provision of public health services and access to education. Further breakdown of income by occupation and geography allows for analysis of regional economic growth potential. Our aim is to ensure that citizens can live in an informed society while at the same time ensuring adherence to relevant data protection legislation. In using the increasingly varied sources of data available, the CSO must ensure that we continue to protect and secure data.

In this regard, the CSO treats all data with strict confidentiality and never discloses any data that could subsequently be associated with any person or business. We have compiled these new statistics using anonymised records and will only produce statistical results at an aggregate level.”