TV images from Donegal to be beamed to 1 million Italians 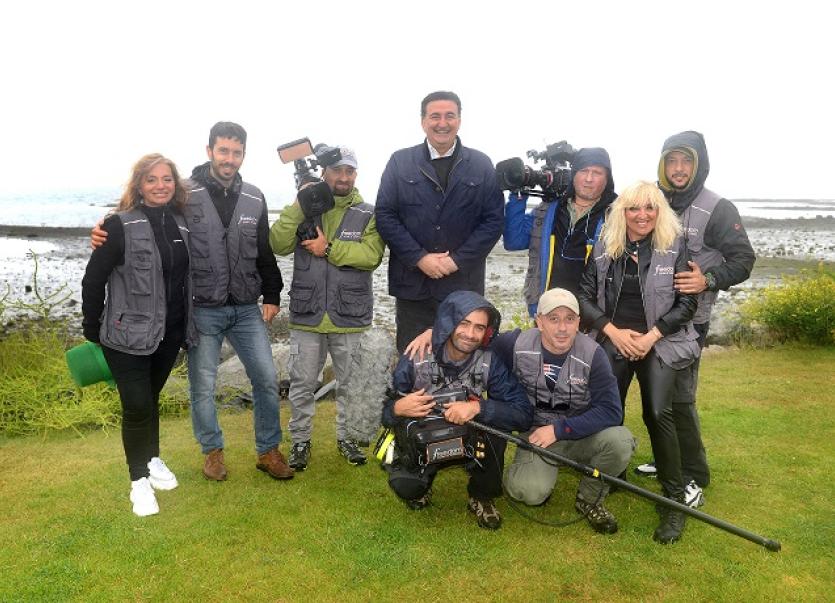 Images of Donegal and Ireland will be beamed into the homes of around 1 million people across Italy at the end of this year, in a special Ireland episode of a popular documentary series.

Filming for the programme  calledFreedom: Oltre il Confine (meaning ‘Freedom: Beyond the Border’),  is taking place here this week and is supported by Tourism Ireland and Fáilte Ireland.

Freedom: Oltre il Confine airs on Italia1 – a major national TV channel – and involves the presenters travelling around the world to experience the history and culture of different countries. The two-hour programme dedicated to Ireland will highlight our rich heritage and culture. The film crew has been capturing footage at St Patrick’s Purgatory on Lough Derg. They stayed in The Abbey Hotel in Donegal town.

Niamh Kinsella, Tourism Ireland’s Manager Italy, said: “We were delighted to invite the Freedom: Oltre il Confine crew to film in Donegal and Ireland, to showcase some of our lesser-known attractions and locations. The two-hour documentary will be seen by around one million viewers – or potential Italian holidaymakers for Ireland – encouraging them to put Ireland on their holiday ‘wish-list’ for 2019.”

Tourism Ireland is rolling out an extensive programme of promotions in 2019, to continue to grow Italian visitor numbers to Ireland. The organisation is placing a greater focus on driving growth to less visited attractions and locations, as well as on driving business in the off-peak and shoulder seasons.

Niamh Kinsella continued: “Television and film are recognised as strong influencers for prospective holidaymakers and Tourism Ireland regularly works with TV and production companies in Italy and elsewhere around the world, to facilitate the making of travel and lifestyle programmes around the island of Ireland. This documentary is an excellent opportunity to showcase Donegal and Ireland to our important ‘culturally curious’ audience in Ital