PLAYER RATINGS: How the Donegal players fared in their epic draw with Kerry 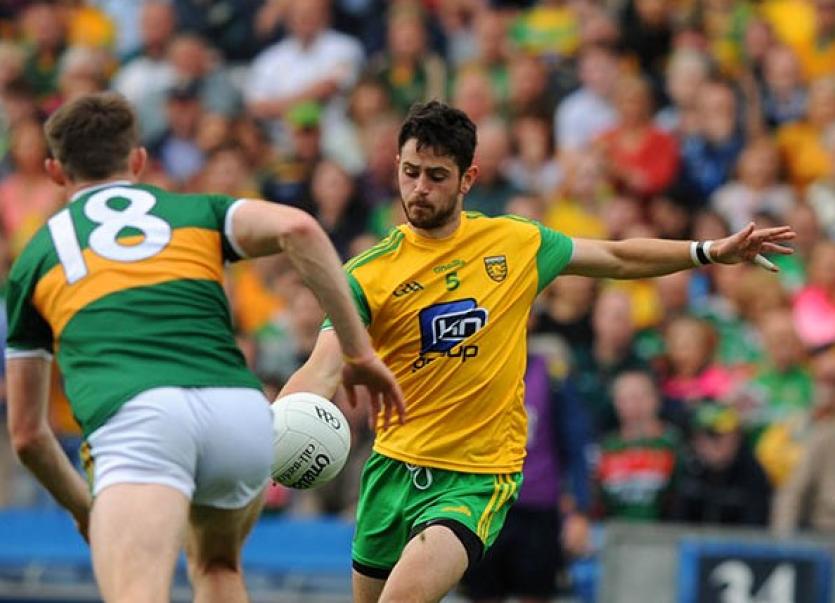 Ryan McHugh, named man of the match, picks off a point against Kerry

After an epic encounter Donegal showed great character to get a draw against Kerry in Croke Park.

Marksman was very happy with the performance. Here are his ratings:

SHAUN PATTON: Another top class display from the St Eunans man. Made a great save from Clifford and his kick-outs and general play excellent. 8
ODHRAN MCFADDEN FERRY: You wouldn't think it was just his third senior game. Hit Gavin White with a crunching tackle in opening seconds. A Neil McGee in waiting. 7.5
EAMONN DOHERTY: In to replace Neil McGee, it was a tough afternoon for the St Eunans man against a top class forward line. Gave everything. 6.5
STEPHEN MCMENAMIN: Got the short straw marking David Clifford but rose to the task and rarely let him inside. A strong performance. 7.5
RYAN MCHUGH: Simply outstanding. Again left everything on the pitch, scored two points and also did some great defensive work. 9
CAOLAN WARD: In for his first start of the championship and he did reasonably well. Unfortunate with the Kerry goal. 7
EOIN MCHUGH: Unlucky not to have got the second goal. The Kilcar man worked really hard, especially going forward. 7
HUGH MCFADDEN: Was excellent in the opening quarter, running the show for Donegal. Unfortunately an injury he picked up during the week meant he was replaced early in second half. 7
JASON MCGEE: Like his midfield partner, was going well until picking up an injury. Got Donegal's opening point. 7
CIARAN THOMPSON: It was an improved performance from Thompson, who was available as an outlet and worked hard all over the field. Unfortunate for the Kerry goal. 6.5
NIALL O'DONNELL: Got caught a couple of times early on but then really got into the game, scoring a point and finding space in the Kerry defence. Was unlucky to get black card. 7
JAMIE BRENNAN: Found the going tough, especially in the opening half. But came more into the game in the second, winning some vital frees, including the one for the equaliser. 6.5
PATRICK MCBREARTY: Frustrated in the opening quarter, McBrearty then began to find his way. Won everything that went his way. Seemed to pick up an injury near end. 7
MICHAEL MURPHY: A colossus once again. Murphy is playing the football of his life at the moment and showed tremendous character to kick equaliser. 9
MICHAEL LANGAN: Hit two mighty points and also worked really hard around midfield. One of his best displays this year. 7.5
DÁIRE Ó BAOILL: In for Jason McGee, Ó Baoill mixed some good stuff with bad. Won the vital penalty to get Donegal on front foot. 6.5
OISIN GALLEN: In for Niall O'Donnell just before half-time, Gallen had a really good second half, hitting two points and also finding Jamie Brennan with a peach of a pass for the second goal chance. 7.5
FRANK MCGLYNN: In for the injured Hugh McFadden, McGlynn put in his usual steady shift and set up the second goal chance for Donegal. 7
PAUL BRENNAN: In for Eamonn Doherty, Brennan put in another good shift for his county. 6.5
BRENDAN MCCOLE and LEO MCLOONE: Not on long enough to rate