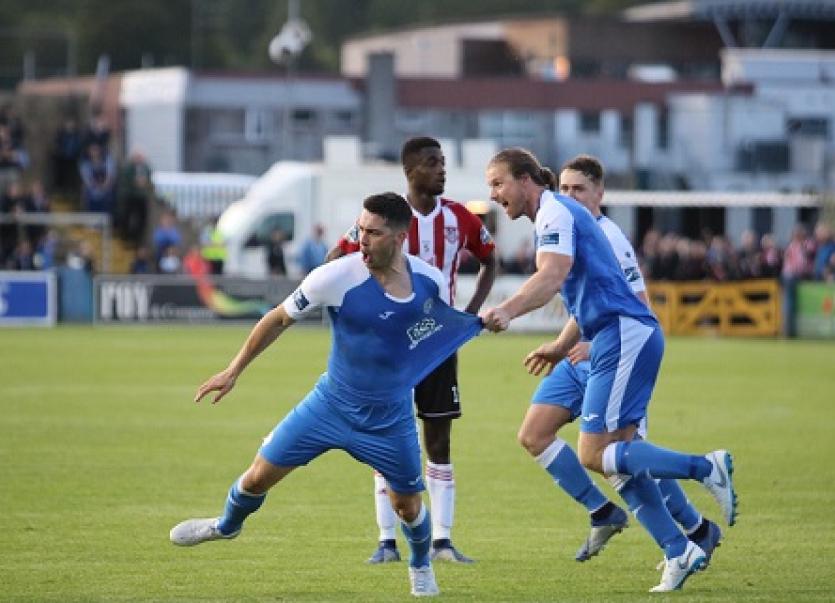 Harry Ascroft turns away in delight along with Keith Cowan after heading Harps in front against Derry City PICTURE: STEPHEN DOHERTY

Finn Harps recorded only their third ever home league win over arch-rivals Derry City in the north-west derby at Finn Park.

Finn Harps recorded a rare but vital win over Derry City at Finn Park to boost their chances of survival in the Premier Division of the Airtricity League.

This result moves Harps three points clear of bottom club UCD while City stay fourth and have lost ground in their bid for a European spot.

Derry had the better of a first half with Gerardo Bruna and Jamie McDonagh having chances before  Junior had an effort saved by Mark Anthony McGinley who then had a minor scare moments later when he struggled to grasp a loose ball under pressure from David Parkhouse.

Harps, who notched up their first away win of the season in Waterford last week, had only one real opening before the break.

Raffaele Cretaro, who was captain on the night in recognition of making his 500thLeague of Ireland appearance, floated in a free that was met at the far post by Keith Cowan whose header hit the side-netting.

Derry almost took the lead on 54 minutes when Greg Sloggett played the ball through to Jamie McDonagh’s but his shot took a deflection.

However, Harps took the lead on 65 minutes when substitute Tony McNamee’s long throw-in was met by Australian Harry Ascroft who headed past Peter Cherrie for his first goal of the season.

Mikey Place fired across the face of the Derry goal on 73 minutes as the home side enjoyed their best spell of the game.

City pushed hard for an equaliser in an exciting conclusion to the game as they pepped the home goal with shots.

They squandered several good chances and at times Harps led a charmed life.

But Harps, with Keith Cowan superb, held on for a crucial win that could help them to avoid the drop.

Harps now face a tough series of games against third placed Bohemians at home, champions and league leaders Dundalk away, and a trip to second placed Shamrock Rovers for a FAI Cup clash in between.

Next up for Derry are matches against lowly Waterford (home) and UCD (away) in the league plus a tie at the Brandywell against First Division Wexford in the FAI Cup.