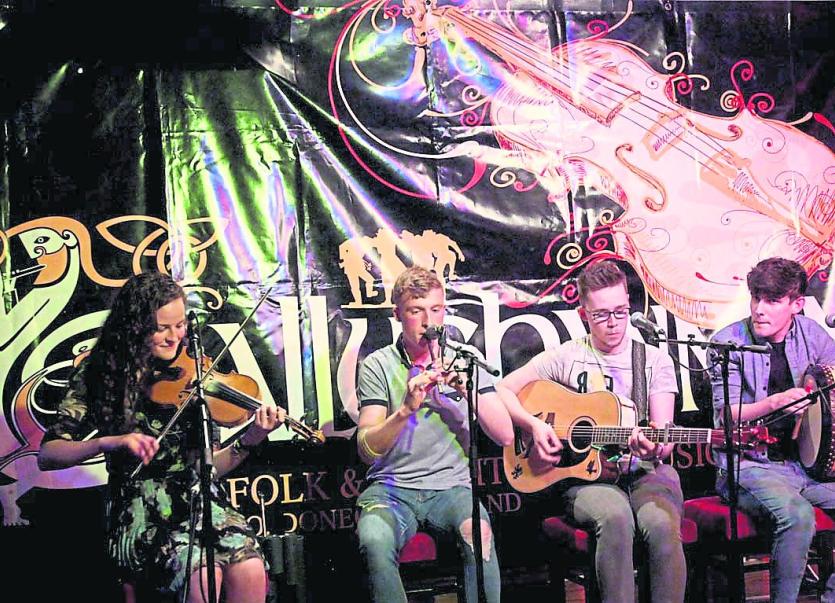 Ballyshannon Folk and Traditional Music Festival hosted its annual showcase final on Friday evening.
Those taking part were competing for a total prize fund of €1,000, and the winners in each category will be performing as part of the line-up to this year’s 42nd anniversary festival, live in the marquee, playing alongside names like the legendary Sharon Shannon, Luca Bloom and The Stunning.
This year's festival takes place over the August Bank Holiday weekend. Friday’s competition was open to folk and traditional musical genres and styles and to all ages and nationalities and has always been an important aspect to the festival as a platform for new and emerging talent on the Folk and Traditional Music scene.
Past winners include Aoife Scott, The Jeremiahs, Cuig, Billow Wood and Celtic Heritage.
The 2019 winners of the group section were In Tune from North Mayo, Niamh O’Donnell, her brother Cian O’Donnell, Conor Maheady and Sean Murphy form part of a four piece traditional/ folk group, who first played as a group together four years ago when taking part in a Siansa Gael Linn group.
The solo section was split into two categories because of the level of talent; the traditional category winner brings an international flavor to our competition, Seamus O’Baoighill who was brought up on the Isle of Skye.

Solo folk category
The solo folk category was won by Tony Reidy from Aughagower, near Westport.
Tony has gained a considerable reputation as a songwriter and his songs have been played on RTE radio 1, Rte Lyric fm, RnaG, Mid West Radio and BBC Radio.
The winning group will be the opening act on the Sunday night of the festival, live at the Marquee with Coda, Dave Munnelly Band and The Stunning.
The solo traditional winner will open Saturday night’s concert as part of the line-up including Backwest, Moxie and Brian Deady and the solo folk winner will open Friday night’s concert joining Seamie O’Dowd, Francie Lenehan, Georgie Gorman, Luca Bloom and Sharon Shannon.