IT OCCURS TO ME: Michael Murphy, as seen through the eyes of a Kerryman

Glenswilly star, a god among men 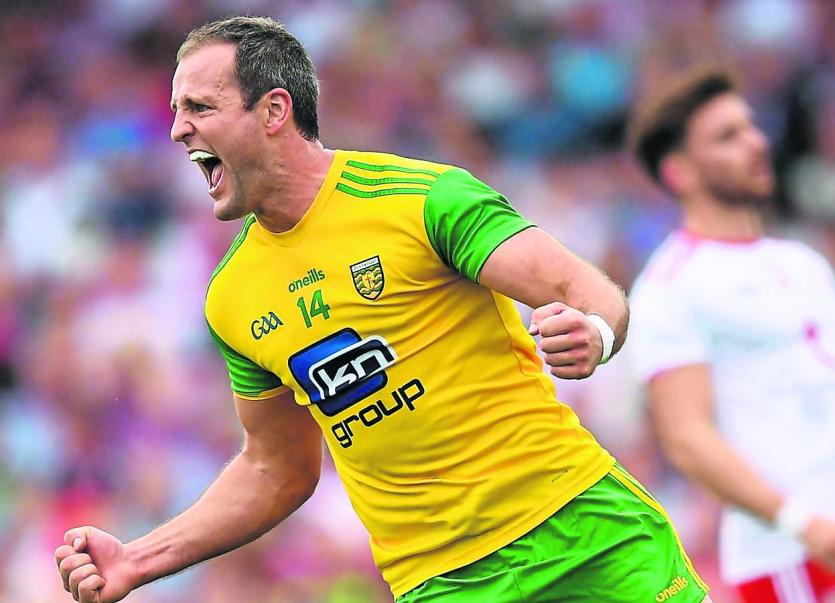 After two days in which Cork hurlers and footballers were defeated, the Lee contingent in Ned Kelly´s in Puerto del Carmen were a bit downcast.
Owner Daragh Boyle, myself and a few converts were wearing our Donegal colours for the Kerry match, when the Cork lads started roaring with gusto for Dun na nGall.
Eamonn from Mallow was unapologetic... “In a Dublin Kerry final, we´d shout for the Dubs!”
“Ah come on” says hi, “your Munster neighbours?”
“Frank boy” he retorted, “the only feckin time I’d support Kerry would be if they were playing Rangers!”
“And your man...Michael Murphy...a god, boy...pure god!”
He drinks Murphy in Mallow! We eat and drink him in Donegal. Big Mick Abu!

CYCLING FOR SOLACE
Thanks to all of you who contacted me to say how much you enjoyed my feature on Sister Magdalene and the The Solace Cancer Support Centre.
On Friday August 2, two remarkable women, Lorraine McCormack and Rachel Knott, will arrive into Donegal town having completed 10,000 km for the Centre.
They will do a lap of honour around The Diamond and then onwards to The Solace Cancer Support Centre where a reception has been arranged. Everyone is welcome to enjoy music, light refreshments, a raffle with great spot prizes and some Irish dancing.
Lorraine´s mum, Maureen McCormack, who was so well known and popular in Donegal town, sadly passed away from cancer four years ago, and because of the great care and comfort she received in Solace, Lorraine decided to complete the charity cycle by way of returning the kindness shown to her mother, her father and herself by Sister Magdalene and the voluntary care team.
As Lorraine and Rachel acknowledge: “We are two girls on two bikes who are embarking on a challenge to cycle 10,000km in a year, finishing with a further 2,000km challenge of cycling from Gravesend, Kent to Donegal in Ireland.
“The journey will take 10 days starting on 24th July 2019 arriving in Donegal on the 2nd August 2019.
“The journey to complete this challenge is going to have its ups and downs, but we are two very determined girls who want to raise as much money for a fantastic cause. We hope you will support us in any way possible and we thank everyone for their contribution no matter how big or small. It will truly inspire us to keep pedalling.”

THE CURSE OF NON-REGULATION
As we found out to our cost during the Celtic Tiger bust, non regulated banking and building was the death of us.
The current housing rental scandal in Ireland stems from all of that, and I was struck by how our neighbours took their eye off the ball six years ago, and are now paying a heavy cost by letting greedy and unscrupulous landlords flourish.
In 2013 permitted development rights were expanded by the UK government to allow office buildings to be converted into housing without requiring planning permission.
Recently, the London Times conducted an in-depth investigation into the resultant Rachmanism (extortion or exploitation by a landlord of tenants of dilapidated or slum property, named after notorious 1950/60’s landlord Peter Rachman).
Landlords are making millions of pounds a year housing children and vulnerable adults in tiny bedsits squeezed into former office buildings.
The developers have exploited a change in planning rules to convert offices into hundreds of flats without any minimum size requirements, prompting claims from experts that they are building “some of the worst homes in Britain” and the “slums of the future”.
Flats costing £800 a month are as small as 14 square meters (150 sq ft), barely bigger than the size of a typical parking space.
Families are living on industrial estates and alongside busy roads, with some residents claiming that mould, noise and anti-social behaviour inside the buildings are damaging their health.
Reading this extract in the Times reminded me that we too have conditions as desperate...and that Government either seem not to care or don’t care because of vested interests.
The buildings often end up housing vulnerable people who typically pay about £800 per month for a studio or one-bed flat and between £1,000 and £1,200 for a two-bed, much of it funded through housing benefit payments.
By including cooking facilities and a small bathroom, developers ensure that bedsits are eligible for the full rate of housing benefit intended to pay for a one-bed flat.”
Are things as bad in Ireland? Sadly so.

DUFFY’S CUT UPDATE
I’ve written here before about the deaths of 57 men at Duffy’s Cut in 1832...from Donegal, Derry and Tyrone.
Many of you will recall the interment of the remains of 18-year old John Ruddy in Ardara in 2013.
“Massacre at Duffy’s Cut: Tragedy & Conspiracy on the Pennsylvania Railroad” by William E. Watson and J. Francis Watson, the brothers behind the excavation of the mass grave at Malvern, PA., was published at the end of 2018, and Revd. Frank Watson says bluntly: “They buried them in coffins with over 100 nails when they needed maybe 12, 15 tops. They just didn’t want anybody opening them up.
“There were people who didn’t want us excavating the site, who didn’t want us telling the story. But no one is looking for restitution. We’re just looking to tell the truth.”
In the latest book, the Watsons surmise that the murderers were members of the East Whiteland Horse Company, a group of vigilantes empowered by Pennsylvania to police the region.
Efforts to speak with descendants of the company’s members, Frank Watson added, have been met mostly with silence.
The brothers have fielded sporadic complaints from defensive locals, including one who tried to get William Watson disciplined by Immaculata University, where he works as a history professor.