Across the Atlantical Sea on the waterbus! 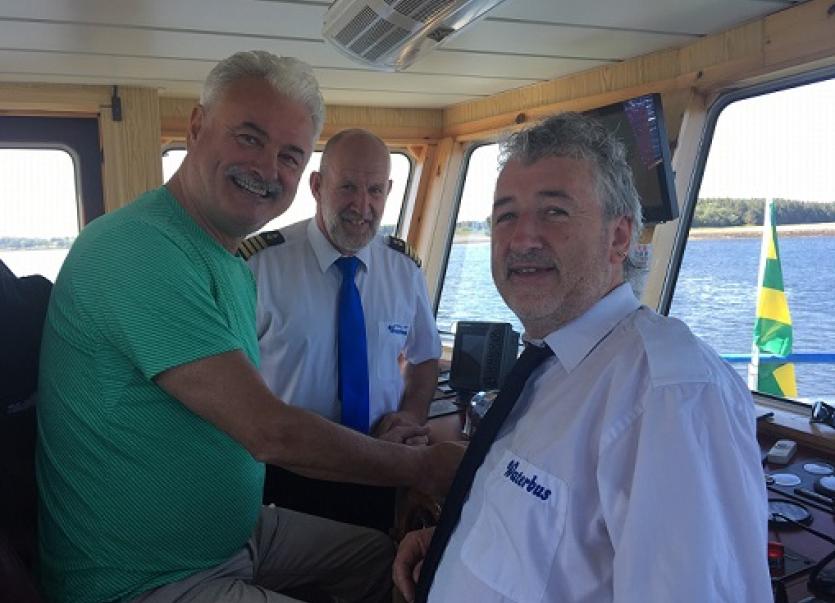 Steering the ship: Frank Galligan on the waterbus with Captain Robert Dunleavy and Tony O'Leary

Just when you think your education is complete, along comes Folksy Gerry and the Donegal Bay Boat.
In fact, my trip was ‘A Tale of two Gerrys’...but more of that anon.
It was a glorious June day, sandwiched between a week of showers and what we call a ‘half midling’ July. The boat was packed - mostly with Germans from Trend Tours in Frankfurt - and to say the craic was 90 is to put it mildly. Folksy Gerry not only narrated the fascinating tour but regaled us with yarn and song.
Helen Meehan first showed me the graves of Seamas MacManus and Ethna Carbery some years ago, and one of Gerry’s first pieces of history on the tours was directing us towards ‘The Green Door’ on Bank Walk, where the famous writers lived.
As MacManus wrote in ‘The House With The Green Door’:
“Lone is the house of my Love,
The house with the green door
That opened to let my Love in,
And opened never before.
It shut behind her that day;
In my face blew the bitter rain;
I cried aloud at the door,
Calling her name–in vain.”
A brokenhearted Seamus outlived Ethna by 58 years as she died in Revlin House of gastritis on 2 April, 1902, aged 37.
Although a native of Antrim, her mother Marjorie Magee was a Donegal woman and as MacManus wrote in his memoir of her:
“Two years afterward, Ethna Carbery came with him to his mountains–her mountains–the purpling hills that had from infancy been beckoning her poet soul.
“At Revelinn, on the estuary of the rolling Eske, just directly opposite the ruined Abbey of Donegal where the Four Masters had lovingly toiled for Ireland–and a bow-shot from the old castle in which her hero, Red Hugh, had held royal court–in a house and scene beautifully pictured by Alice Milligan in her "House of the Apple-trees"–Ethna Carbery settled down to her new life. “Oh, it is glorious here!" she wrote to a friend in Dublin.
“"Sea, and bay, and river, and dear beautiful shadowy hills! I live poetry.”
Folksy Gerry advised us to “Have a good time but don’t go overboard!” I don’t know if all our German friends quite got that humour but Gerry Sexton from Clare certainly did. He rocked with laughter and sang along with every song.
The big Miltown Malbay man had cycled up and was heading ‘In Through’ the following day. When he got his hands on the other Gerry’s microphone, not only did he speak flawless German, but I was tempted to make the two Gerrys an offer they couldn’t refuse - I’d manage the pair of them...Folksy and Sexy!!
Sexton sang Percy French’s classic ‘The West Clare Railway’, which begins appropriately:
“You may talk of Columbus's sailing
Across the Atlantical Sea…”
...and just as Folksy Gerry had the German tourists singing
”Tooralooraloo. ..tooralooralay” to his ‘Jug of Punch’, the big Clare man had them chanting “Choo choo!” to his “Are ye right there, Michael, are ye right?”
Nicky and Julia from Trend Tours were absolutely delighted with the tour and particularly the entertainment.
Our bay of seven islands is imbued with history, from the Vikings to the fledgling Irish State. Acclaimed writer and Nationalist Alice Milligan, a dear friend of the MacManus’s was officially employed as a travelling lecturer by the Gaelic League in 1904. She began to travel across Ireland with her own portable magic lantern and a camera that she used to collect pictures for slides.
These pictures were both projected and accompanied by storytelling, public talks or music.

Magic lantern
The Derry Journal reported that: “At Mountcharles that evening a case was opened containing a splendid magic lantern, presented by a friend of the cause to the Shan Van Vocht, Belfast. This lantern is to be used at meetings and entertainments through Donegal, where the lecture and description of slides is given in Irish.
“Mr Patrick McManus presented a beautiful collection of slides, collected during his travels around the world and these include views of Rome, Paris, India and Japan, as well as views of Ireland. Miss Milligan presented a set of historical slides dealing with the lives of Red Hugh O’Donnell and Hugh O’Neill.”
The ‘Shan Van Vocht’ was a national monthly magazine founded in 1896 by Alice Milligan and Anna Johnston (Ethna Carbery) while the aforementioned Patrick MacManus, a brother of Seamus, emigrated to Argentina and on his return bought the Rossylongan Estate, yet another interesting fact pointed out to us by Folksy Gerry on the trip.
Indeed, in June 1912, Arthur Griffith wrote to Patrick McManus in Argentina requesting financial aid for Sinn Fein.
His house in Rossylongan was the first to have electricity locally.
One of the many highlights on the boat trip, and one which had cameras and phones whirring, is a colony of some 200 Harbour and Atlantic seals. Although seal viewing is tide dependant, we were lucky to get close to the sands and see many of the recently born pups.
Well done to Gerry, his fellow guide Eamonn Brogan, Jackie who can serve Irish Coffee and play the bodhran, as well as Anto behind the bar.
Captain Robert Dunleavy and Tony O'Leary are in the accompanying photo, and as Director Brian Neilan informed me, although tourism numbers are being hit by the uncertainty of Brexit, the Bay Boat brings some 30,000 extra visitors here annually.
You may talk of Columbus's sailing...Across the Atlantical Sea…But the Donegal Bay Bus it is flying..and I must say, it did it for me!