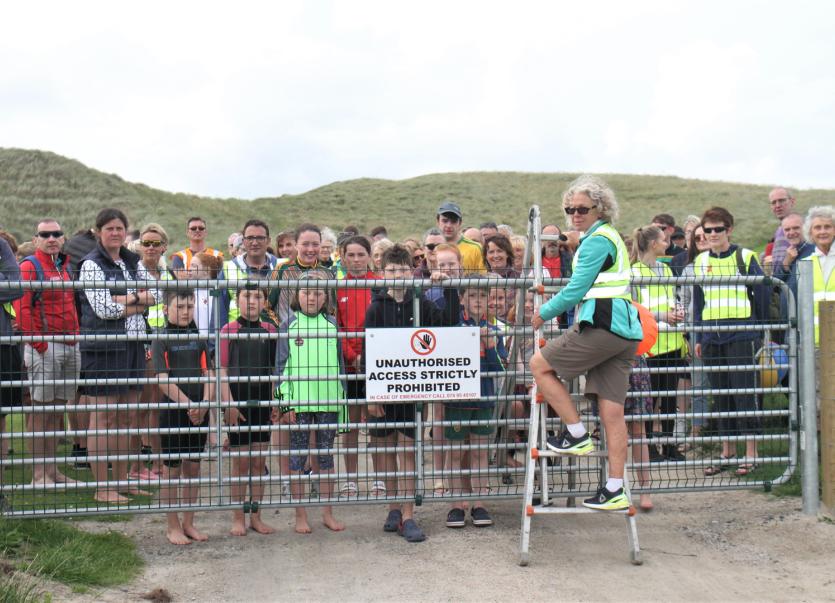 Up to 300 people have held a protest as part of a standoff with management at a golf course over access to a  local beach.

The protest walk at Narin Strand on Saturday follows the erection of fencing and a gate at Narin and Portnoo Links which locals say is preventing public access to Castlegoland Beach.

The club says it has no choice but to restrict access due to health and safety issues caused by non-golfers walking across the course and horses causing damage to greens.

Protesters and management disagree on the existence of a right of way to the beach.

Donegal County Council said it could not comment on the issue “as this is an ongoing Planning Enforcement case”.

A local action group, ‘Save Our Beach  At Castlegoland’, has been formed. Saturday’s protest followed a public meeting earlier this month.

The club was taken over last year by Knather Acquisitions, a company run by Donegal-born US-based businessman Liam McDevitt, after the golf club ran into debt.

The club said it was left with no other option but to secure  the perimeter of the golf course following incidents including “non-golfers walking throughout the golf course as if it were a public park”, a camper van whose owner had been told he was entitled to camp on the golf course, sand dunes being eroded on the beach side from human traffic leaving and entering the golf course and horses getting  onto the course and causing damage.

On Saturday, protestors came from throughout the county including Donegal town, Ballybofey and  parts of west Donegal. Protestors also included many who have holiday homes in the Ardara, Rosbeg, Narin and Portnoo areas.

As golfers approached, there were very pleasant exchanges between the groups and those protesting gave way to the users of the course.

Faye Harrisson, a keen long-distance runner who lives just across from the disputed area said: “To be perfectly honest I think it’s a shame that it has come to this. This roadway has been used by both the local community and visitors for leisurely walks or, like myself for training and we all respect the golfers and get on very well with them.

“We now have a tense situation with electric fencing and padlocked gates. Surely some solution can be found.”

Ninety-three-year-old John Moore whose family own most of the land surrounding the disputed areas said: “I have been living here all my life and there has always been a right of way here, it’s as simple as that.

“Years ago many used the road on their pilgrimage to Inniskeel - today both the locals and the tourists use it and up to recently, there were never any problems. Even the golfers use it as access to the beach when they are not golfing.

“We now have electric fences around the place and padlocked gates. For a club that was often referred to as the 'friendly wee club', it is certainly sending out the wrong message.”

Tony Kitterick of Save Our Beach added: “We are delighted at the show of public support in what was a quiet, pleasant non-confrontational walk, as it should be.

“As usual the rights were exercised with no harm to Narin Portnoo links property which in the current situation is commendable given the level of anger in the community at being deprived of the beach for the summer; it's peak time.