Another significent twist in relegation battle as UCD lose again 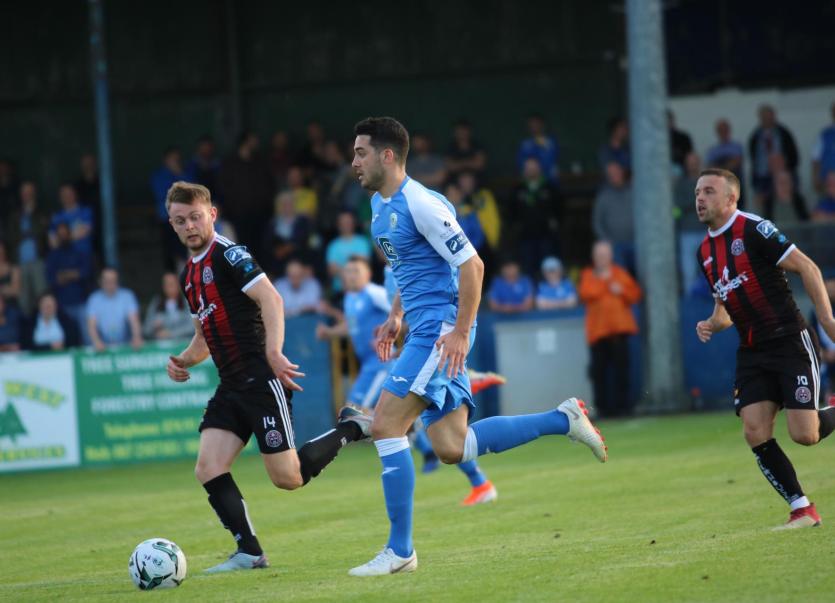 Harry Ascroft in action on Friday night. The midfielder was back among the goals for Harps PICTURE;: STEPHEN DOHERTY

For the second game in succession, Harry Ascroft hit the winning goal as Harps recorded another crucial Premier Division win.

The midfielder’s volleyed effort eight minutes in proved enough to give Harps the three points  and hand them a third 1-0 victory in as many games.

Significantly, they’ve moved six points clear of bottom of the table UCD - the Students losing out 3-1 at home to Derry City on Friday night.

Ollie Horgan will still insist there remains a long way to go in this battle to avoid the drop, but this win for Harps really puts the pressure on UCD with games beginning to run out.

Those who watched this game on a perfect summer’s evening hadn’t long to wait for the opening goal. Harps had started well and they grabbed the lead seven minutes in. Mark Timlin and Jacob Borg were involved in the move which ended with Mikey Place teeing up Ascroft on the edge of the box and his first time volley flew into the net past the dive of James Talbot. The home side kicked on from that perfect start, passing the ball with pace and precision. Timlin was lively in the opening exchanges and shortly after the goal Harps bombarded the Bohs box with a succession of corners and long-throws, and from one Tony McNamee delivery, Daniel O’Reilly saw a looping header held by the keeper.

McNamee was in from the start in place of the suspended Raff Cretaro in the only change from the win over Derry City last Friday night.

The Ramelton man was prominent in a Harps midfield which was really impressive in the first half and that meant that Bohs struggled to get their game going.

Daniel Mandroiu in attack was their most dangerous player but their only notable effort on goal was from a Keith Ward long range shot on 33 minutes but his effort was always drifting wide of Mark Anthony McGinley’s goal.

Ward was replaced by Danny Grant at half time as Bohs sought a good start to the new half.

They started well and Andre Wright had a snapshot which wasn’t too far wide.

But Harps continued to impress and with McNamee, Timlin and Harkin all able to do the simple things well, they saw plenty of the ball coming forward.

Harkin was unlucky not to connect better with a Borg cross on the hour, the midfielder sliding in but his shot was saved by Talbot.

Ascroft also had Talbot scampering across his line to watch a long range strike bounce not far wide.

Bohs though, raised their game for the final quarter and Wright had a half volley saved by McGinley.

But with news filtering through from Dublin that UCD had lost against Derry City, the home supporters knew that if their team could hold out in the closing stages, this could be another significant night in the battle for Premier Division survival.

Harps brought on new signing Ruairi Harkin for the final few minutes and Nathan Boyle was also a late substitute as the home side dug deep to fasten another brilliant win.