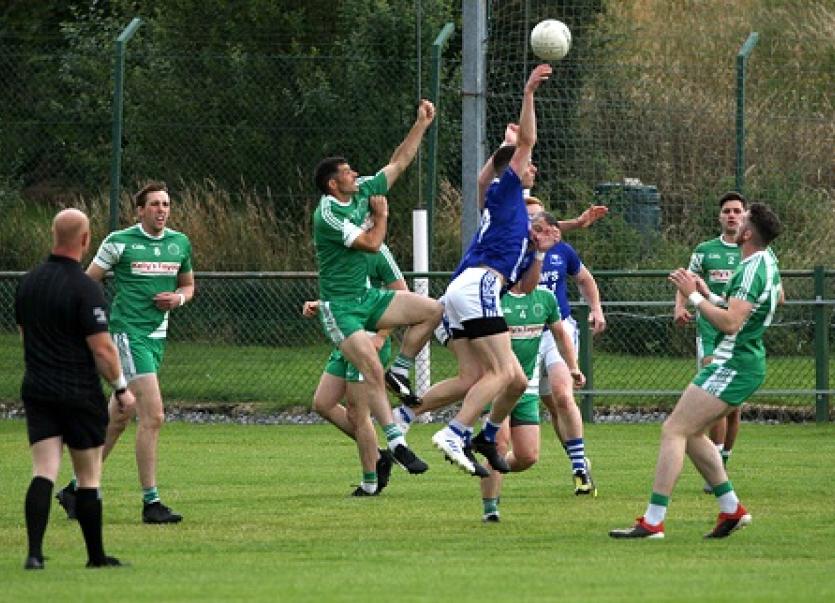 Daniel Brennan, Cathal Lowther and Michael Coughlan struck the killer blows for the home side in the 46th, 52nd and 59th minutes to make sure of a vital victory, with a crunch home tie coming against Ardara next week.

The electrifying Peadar Mogan had a big hand in the first two goals in the second half as the Masters defence struggled to cope with his direct blinding pace.

And young Coughlan showed great composure in finishing a clever five-man move to the net to cap a memorable win.

They lost Cathal Lowther to a black card and Barry Griffin to two yellow cards deep in injury time.

But the final score does not do justice to a battling Masters side, who played some inventive football, but their conversion rate was shocking.

They hit a total of 14 wides to their opponents’ six and many of these were from scorable slots.

Kevin McBrearty, Caolan Loughney, Leo McHugh, Barry Dunnion and Kevin Breslin tried their hearts out, but they were repeatedly caught cold on the counter attack.

St Naul’s sub John Rose had a big impact when he was brought on in this deserved victory.

Four Masters had by far the better of the first 20 minutes and must have been wondering why they turned over only level with the hosts on a score of 1-3 each at the break.

On closer examination, they also hit seven wides to their opponents’ three which may more fully explain their frustration.

Masters were in bad need of the points to avoid the long drop and the certainly opened with real urgency.

Big Kevin McBrearty was having the best of the midfield tussle with his first cousin Lee McBrearty and veteran Barry Dunnion and Leo McHugh were making penetrating runs from deep.

The first five minutes were tense and hard hitting before Masters brilliantly broke the spell with a superbly crafted goal.

Kevin McBrearty played a clever low pass to Jamie Crawford, who speared in from the side line before astutely picking his spot to give the visitors the perfect start after five minutes.

They should have had another in the 8th minute when Sean O’Kennedy’s shot slid across the goal, but Oisin Reid was just not able to finish.

Naul’s eventually settled and Stephen Griffin opened their account with a free in the 12th minute.

Conor McDaid book-ended a flowing Masters move with a well struck point in the 18th minute to put them into a commanding 1-2 to 0-1 lead playing into a slight breeze just after David Quinn got their first in the 13th minute.

Griffin added another point before Peadar Mogan who bears a strong resemblance to Martin McHugh in build and style, scored a fine point from the wing.

But the game was turned totally on its head in the 25th minute when the hard-working Barry Griffin palmed a Stuart Johnson cross to the net after good work by Daniel Brennan.

Shellshocked Masters replied with another point from the accurate Quinn.

They had some good chances immediately after half-time and went into a 1-6 to 1-4 lead, but like Donegal in Castlebar, their accuracy deserted them when they needed it most.

St Naul’s kept cool and Stephen Griffin’s pointed frees kept them in contention before they struck the first of their three killer goals in the 46th minute from Daniel Brennan.

A deserved victory for the home side, whose rap music is a big part of their motivation and they could yet be singing a sweet tune by the end of the season.