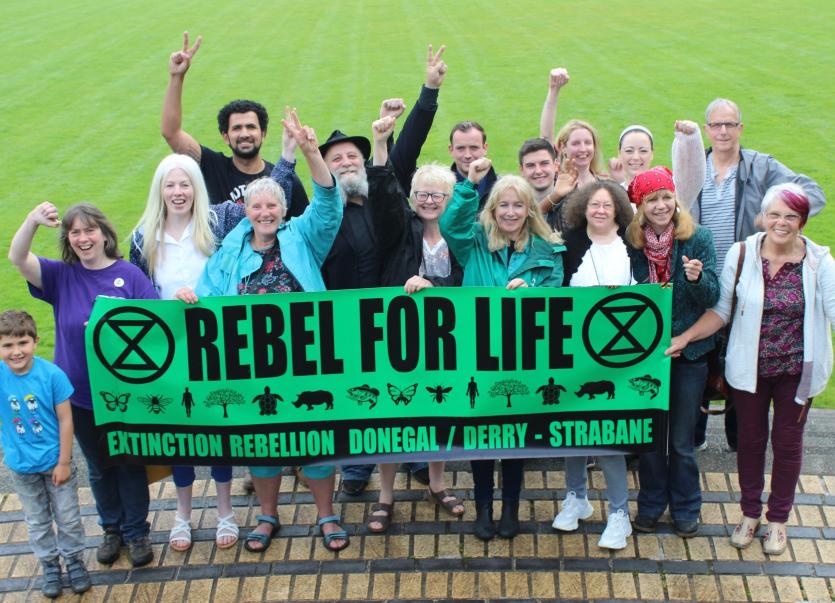 A group of local activists have joined a global movement which has been highlighting the need for action on climate change.

Extinction Rebellion Donegal was launched at an event in Letterkenny Town Park.

Extinction Rebellion is a global movement of activist that use nonviolent methods to get people in power to tell the truth about the environmental emergency we face and to take appropriate action. It has been rapidly spreading across the country and Nora Newell in a brief opening of the meeting outlined how a group came together in March 2019 as Derry/Strabane Donegal. They are now forming a group for Donegal to support the development of autonomous local groups across the county that will have representation on the County Group. An information evening will take place on 21 August at 7 pm in the Community Centre, Letterkenny. A further meeting to formalise the group will take place on 2 September at 7 pm.

The audience heard Clare Thompson read from the Extinction Rebellion Declaration stating: “Humanity finds itself embroiled in an event unprecedented in its history. One which, unless immediately addressed, will catapult us further into the destruction of all we hold dear: this nation, its peoples, our ecosystems and the future of generations to come.”

Voicing her frustration at the poor response of the government to the climate crisis Caroline Kuyper said, “I felt, with many others, that direct acts of disruption of 'business as usual' is the only option left at this point to force the issue onto the forefront of governments and corporations' agenda.”

Natural beekeeper Aoife Valley pointed out that “when we act, we feel better. When we set intentions and follow through, we can relax a bit. This is not something we will fix individually. Joining XR is part of me doing my bit. I am hopeful we can sort this out.”

The meeting closed with a quote from broadcaster and naturalist David Attenborough who has said, “I feel an obligation; the only way we can get up in the morning is believe that, actually, we can do something about it. And I suppose we can.”