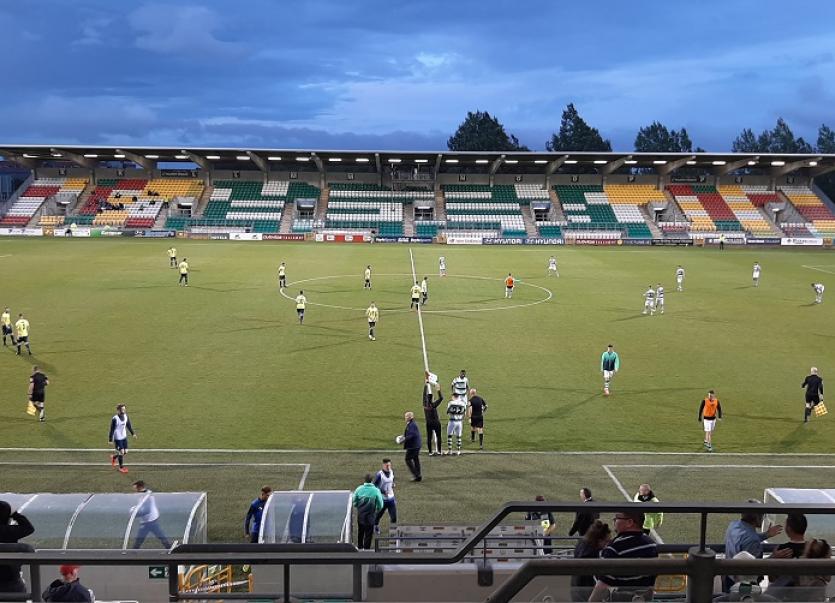 Finn Harps’ FAI Cup dreams are over for another year after they made their exit at the first hurdle, going down to a strong Shamrock Rovers side at the Tallaght Stadium.

Ollie Horgan’s Finn Harps put up a battling performance but Shamrock Rovers ultimately deserved their win before an attendance of 1.372.

Harps made four changes from the side that beat Bohemians in their last league outing, with American Joshua Smith making his debut in a five-man defence while Raffaele Cretaro was named captain and operated up front as a lone figure for long periods.

With the league title probably beyond them, Rovers (who haven’t won the competition since 1987) will be pushing hard to bring the silverware to Tallaght this season.

Harps endured a nervous start and Rovers hit the post through a Ronan Finn header in the third minute and goalkeeper Mark Anthony McGinley was under some early pressure.

But on ten minutes, in their first venture forward, Raffaele Cretaro, captaining the Harps side, let fly with a decent effort form outside the box that wasn’t far wide.

However, Rovers were much the better side in the opening quarter and twice chances fell to Graham Burke  - one hit the side-netting – before they deservedly took the lead on 22 minutes.

Finn played a delightful diagonal ball which found Dan Carr inside the box and he showed some deft touches before dispatching the ball past McGinley and into the opposite corner.

And Harps survived another scare moments later when a Burke ball in from the right found Finn whose low drive was deflected out of play.

Rovers missed a great chance to double their tally on 41 minutes when Harps failed to clear and Aaran McEneff’s effort was blocked and the ball scooted across the face of goal and into the path of Burke but he somehow steered the ball wide.

Harps, who deployed five men at the back, had a half-hearted appeal for a penalty just before the break as new signing Joshua Smith went down in the box but referee Rob Rogers promptly waved play on.

Rovers began the second half smartly and Cretaro was fortunate not to be punished after losing possession and Carr was in with a chance but his shot was saved – but in any event he was off-side.

The Hoops again enjoyed plenty of possession and one sensed that a second goal would seal the issue as they camped for long periods in Harps territory.

But Harps enjoyed a brief period on top midway through the second half and following a rare corner both Harry Ascoft and Cretaro had shots blocked.

Rovers, though, soon began to dominate again with McGinley being forced into action to save a header from substitute Dylan Watt and then a shot from Aaron Greene.

And in the 69th minute Greene was in again but he blasted over from a good position.

On a rare counter attack Cretaro put substitute Nathan Boyle into space and his shot hit the post with Rovers goalkeeper Alan Mannus getting a vital touch to push the ball onto the post.

Both sides had penalty pleas for handball in a lively final 15 minutes as Harps pushed up and mounted the occasional attack on and in 83 minutes Dan O’Reilly just failed to connect properly with a header at the far post.

But Rovers overall were good value for their win although they made hard work of it.

For Harps, it's bad to the league next week and a trip to Dundalk.