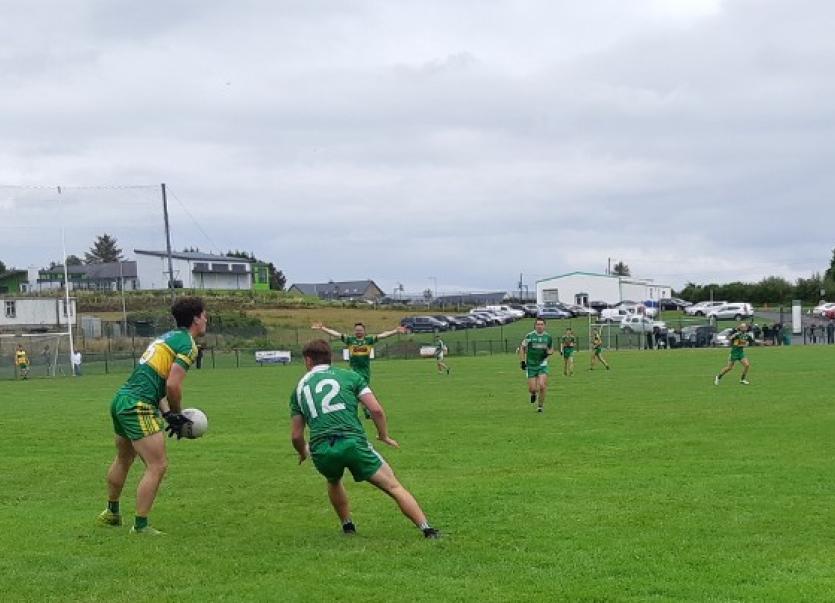 John Ross Molloy on the ball for Ardara in Mountcgharles

Ardara took a giant step to returning to Division One when they proved much too strong for a poor St Nauls outfit in Mountcharles.

That St Nauls' only score from play was in the final minute and even then it was a saved penalty which rebounded kindly to Stephen Griffin to tap home.
Griffin accounted for the other five points from frees as the home side looked toothless up front.
But that was down to a tigerish Ardara side who had real stars at the back in Joe Melley, Matthew Maher and John Ross Molloy. Conor Classon was in control in the middle of the field while up front another veteran Gareth Concarr proved too lively for St Nauls.
Ardara are now three points clear at the top with three games to go and it looks as if they have one leg back in Division One after this result.
There was an edge to the game right from the start which underlined the importance. However, the closeness of the jerseys must have also made it difficult.
Ardara had the opening point on three minutes, Lorcan O'Donnell firing over and the lead was doubled a few minutes later when Conor Classon found Gareth Concarr with a probing ball. Concarr took on Conor McBrearty, who had little option but to haul him down. McBrearty was black carded and Concarr pointed the free.
Stephen Griffin had the home side on the board on eight minutes and the former county player would account for all three of the home side's opening half points.
St Nauls had plenty of possession but lacked a cutting edge. They had Peadar Mogan at full-forward but he got little change out of John Ross Molloy.
At the other end Caolan Gaffney was heroic in his defending. After Griffin levelled on 12 minutes there was a goal chance for St Nauls after Daniel Brennan intercepted the kick-out. But Brennan was unable to pick up and Peadar Mogan was denied at the expense of a '45'.
Another eight minutes would pass before Ardara struck for two points inside 30 seconds, Tomas Boyle and Niall McCrossan finding the target.
Griffin again replied but just before half-time Ardara hit another brace. Robbie Adair made a great break. His effort for goal was well blocked by Enda O'Hagan but it fell for Jack Brennan to tap over. And from the kick-out Tomas Boyle added his second and Ardara's sixth.
On the stroke of half-time CJ Molloy went off with a knee injury, while an interesting stat from the opening half was that St Nauls won 14 frees to Ardara's four. Half-time: St Nauls 0-3, Ardara 0-6.
Ardara went on to completely dominate the second half and they had a point on the board inside two minutes, Tomas Boyle taking advantage of a poor kick-out.
St Nauls did have a goal chance on 37 minutes when Stephen Griffin took a quick free and found half-time substitute Cathal Lowther. Lowther's effort was saved and Declan Gavigan got back to somehow get it off the line.
Barry Griffin won a free for big brother Stephen to hit the fourth Nauls point but Joe Melley responded and the game was as good as over when Robbie Adair thundered through to fire to the St Nauls net on 41 minutes.
John Rose had an effort saved at the expense of a '45' while Stephen Griffin hit his fifth free on 46 minutes.
The home side would only have one further score, a goal from Griffin after his penalty was saved by Cillian Gildea in the 60th minute.
By that stage Peter Oliver McNelis had marked his introduction with a neat point while John Ross Molloy fired home Ardara's second goal on 53 minutes. And before Griffin's goal, veteran Gareth Concarr fired over Ardara's last score with his left on 59 minutes.