A wonderful afternoon as charity cycle comes to an end 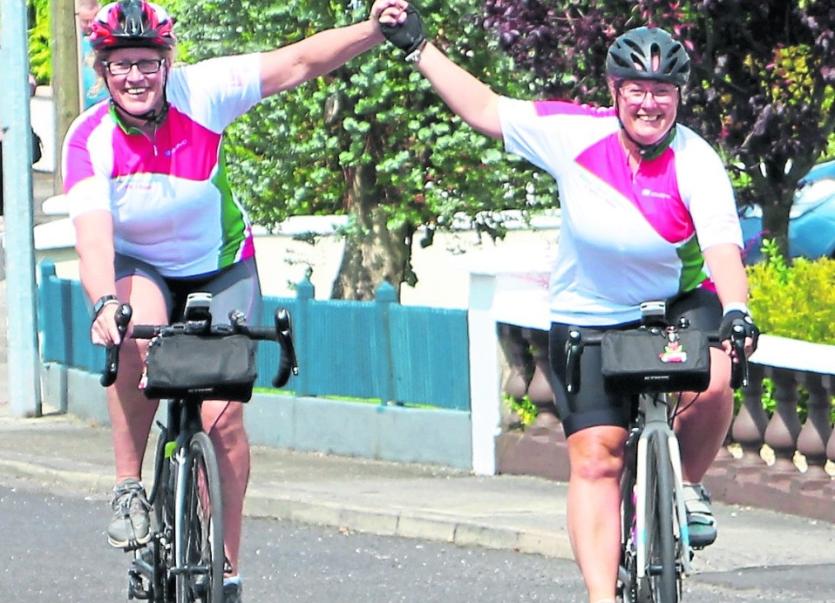 Lorraine and Rachel after completing their 10,000kms cycle

When Eamonn Brogan and Brian Curristin sang what has now become our county’s anthem, ‘Home To Donegal’, in the Solace Cancer Support Centre last Friday, the large crowd present joined in with great gusto.

It added to what was already a wonderful afternoon as we awaited Lorraine McCormack and Lorraine Knott to complete their 2,000km bicycle ride from Gravesend in Kent to Donegal town, having already completed 10,000km for Solace.

They had already done their lap of honour around The Diamond, accompanied by the Donegal Cycling Club and an Garda Siochana and as well as the reception in Solace, there was great music thanks to the lads, food and refreshments to fill an army, tremendous dancing from the McNelis Cunnigham School of Irish Dancing and not forgetting the raffle with some great spot prizes. Lorraine and Rachel with Frank Galligan, journalist / broadcaster and MC at the event

Gerry McCormack, Lorraine’s dad, spoke very movingly of the care his wife Maureen had received in Solace and Maureen McCartney, Lady Captain in the Donegal Golf Club, spoke warmly of her late friend’s love of the game and her popularity in Donegal.

The golf club also presented a cheque of almost €1,000 to the centre and Mayor Pauraic Kennedy spoke of how humbled he felt in such a gathering.

Mary Green, one of the founding members, contributed on behalf of Solace and there was long and sustained applause when she acknowledged the incredible work of Sister Magdalene and the volunteers who are such an integral part of the centre. Anne and Aiden Gallagher with Maura Caldwell and India Kennedy

Rachel Knott epitomised the amazing strength and commitment of both cyclists. The Kent native, only on her second visit to Donegal, had broken her shoulder last year, was out for some five months but determinedly got back in the saddle.

All in all, a day to remember and as Eamonn and Brian reminded us:

“No matter where I roam, it’s in my soul,

“My feet may wander, a thousand places,

“But my heart still leads me,

“Back home to my Donegal.”

Substitute ‘wheels’ for ‘feet’ and Lorraine and Rachel too could have their anthem.