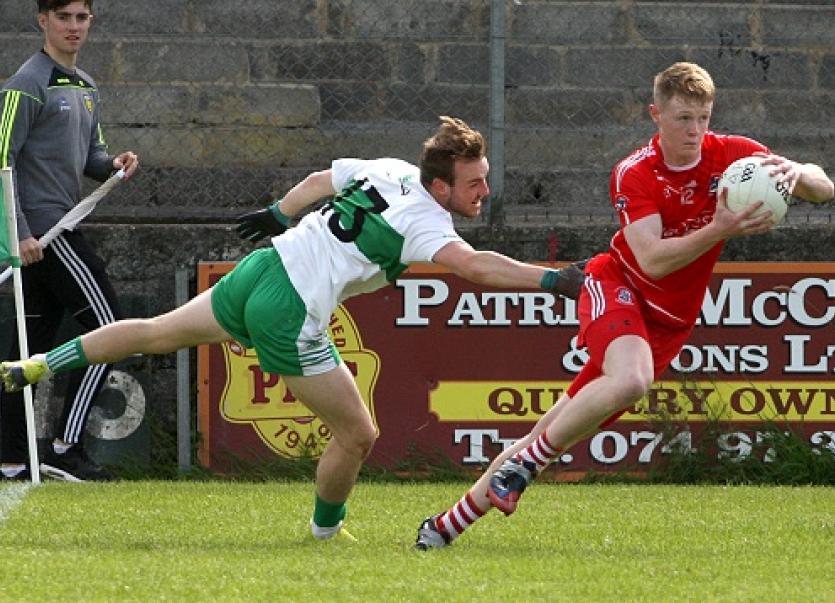 Aodh Ruadh put in a strong second half performance to get themselves back in the promotion race with this win over Killybegs.

The sides are now level on 19 points, each with two games left. With Ardara being promoted after their win over Four Masters, it is one from three as St Nauls are also on 19 points with two games left.
Aodh Ruadh play St Nauls next away with Ardara at home in their final game, while Killybegs are home to Naomh Columba and away to Termon. St Nauls final game is away to Naomh Columba.
There was a strong wind blowing down Fr Tierney Park from the Hospital end and Aodh Ruadh had the advantage of it in the opening half. They did well for the first quarter, but then seemed to lose their way as Killybegs played the possession game.
Shane McGrath won a free for Philip Patton to open the scoring. Michael Gallagher levelled with a fisted point but Aodh Ruadh would score the next four points through Shane McGrath, Peter Boyle '45', Philip Patton and Nathan Boyle.
Killybegs were almost in for a goal on seven minutes but Colm Kelly performed the perfect tackle on Christopher Murrin, while a minute later Eamonn McGrath was through at the other end but Kevin Martin brought off a great save at the expense of a '45'.
The second quarter was dominated by Killybegs as they held possession well against the wind. They had a goal chance on 20 minutes with Michael Gallagher almost connecting in a scramble in front of Peter Boyle's goals. They did win a free for Hugh McFadden to tap over.
Christopher Murrin added another three minutes from the break while the final score of the half was a Philip Patton free after Nathan Boyle was fouled.
Half-time: Aodh Ruadh 0-6, Killybegs 0-3.
The standard in the first half was poor but in the second half it was a much better spectacle. Seamus Og Byrne had the opening point of the second half, his effort hopping over, but Michael McKenna replied. Michael Gallagher, Killybegs' best forward, cut the lead to two again but Nathan Boyle started and finished a great point and Shane McGrath won a free for Peter Boyle to point.
Hugh McFadden and Philip Patton traded frees before Michael Gallagher and Seamus Og Byrne cut the lead to two points - 0-10 to 0-8 - with 53 minutes on the clock.
There was a hectic closing 10 minutes with Aodh Ruadh storming six points clear after Oisin Rooney was released by Michael McKenna and he drove to the net. Shane Gillespie added the point on 56 minutes.
Killybegs almost got a goal on 58 minutes when a high ball in broke and Paul Cunningham palmed just over the crossbar. Oisin Rooney added a point but Killybegs got the goal they threatened with Hugh McFadden flicking to the net. McFadden spent the final minutes inside and the Fishermen fired everything long.
Nathan Boyle pushed the lead out to four but McFadden converted a free on 63 minutes to leave it three again. But then Shane Gillespie won the kick-out and sent Michael McKenna clear and he found Darren Drummond to fist over the final score.