DRAW OF NO USE TO EITHER SIDE IN PROMOTION RACE 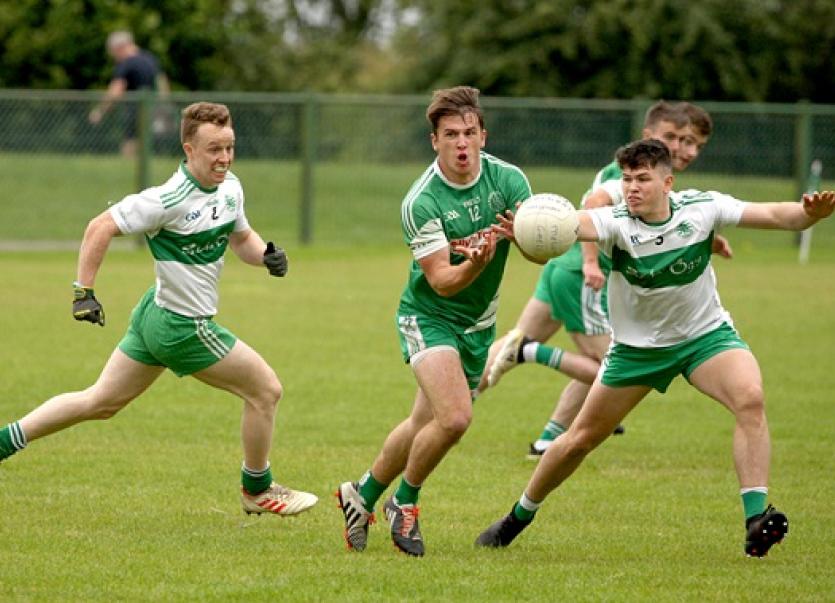 Peadar Mogan on the ball with Colm Kelly closing in Picture: Thomas Gallagher

But while both sides now only have a slim chance of promotion, it was cracking contest with some great entertainment for the spectators as both sets of players went at it full throttle.
There were some great scores and a very exciting final quarter. Peter Boyle pulled off a top class save when the sides were level with 12 minutes left while Aodh Ruadh will be disappointed with two late calls by an otherwise excellent James Connors. A high challenge on Shane McGrath went unpunished and they were also pulled up for an illegal hand pass in the final minutes when on the attack.
The game had an edge to it from the start. The fact that the losers would end their interest in the league was one issue while these sides are due to meet in the group stages of the Intermediate championship also.
Aodh Ruadh had the better of the opening quarter and were three points up inside 10 minutes through Oisin Rooney, Philip Patton from play and a free after good work by Cian Dolan.
Shane Conneely eventually got St Nauls on the board on 15 minutes and they were the better side in the second quarter, although Aodh Ruadh were still 0-5 to 0-2 ahead on 18 minutes, Sean Taylor (starting and finishing) and another Patton free were their scores while Peadar Mogan converted a free for St Nauls.
Mogan became the central figure for St Nauls from then until half-time. Stuart Johnston added their third point before three Mogan points in as many minutes had the home side ahead 0-6 to 0-5.
Aodh Ruadh were almost in for a goal on 26 minutes after good work by the industrious Sean Taylor. Philip Patton's effort was blocked by the tigerish Caolan Gaffney for a '45'.
Immediately St Nauls tore upfield with Martin Breslin winning the kick-out. He found John Rose who slipped the ball through to Peadar Mogan to find the Aodh Ruadh net.
To their credit Aodh Ruadh responded and hit the final three points, Shane McGrath getting two of them and Nathan Boyle. Two of them came from poor kick-outs.
Half-time: St Nauls 1-6, Aodh Ruadh 0-8
Stephen Griffin had his first point of the contest inside a minute of the restart and Peadar Mogan added another immediately to go three clear.
Philip Patton and Stephen Griffin traded frees and Patton and Mogan did likewise by the 45th minute.
Then three Aodh Ruadh points in just over two minutes had the sides level - Shane McGrath, Philip Patton (free) and Darren Drummond with a fisted effort.
It was then that St Nauls had the goal chance with Mogan and Stephen Griffin combining to put Stuart Johnston through one on one with Peter Boyle and the 'keeper made a great stop at the expense of a '45'.
Stuart Johnston made amends by fisting Nauls into the lead again but Niall Murray levelled.
Then Cathal Lowther and Griffin from a free put Nauls two in front with seven minutes left.
But Aodh Ruadh came again with Shane McGrath winning a free for Patton to point and young Shane Gillespie came forward to hit the equaliser on the 60th minute.
Both sides had chances in a frantic finish before the final whistle sounded.
Peadar Mogan, Lee McBrearty, Caolan Gaffney, Brendan McCole, Shane Conneely and Stuart Johnston were excellent for Nauls while the ever improving Sean Taylor, Shane Gillespie, Oisin Rooney and Shane McGrath were to the fore for the visitors.