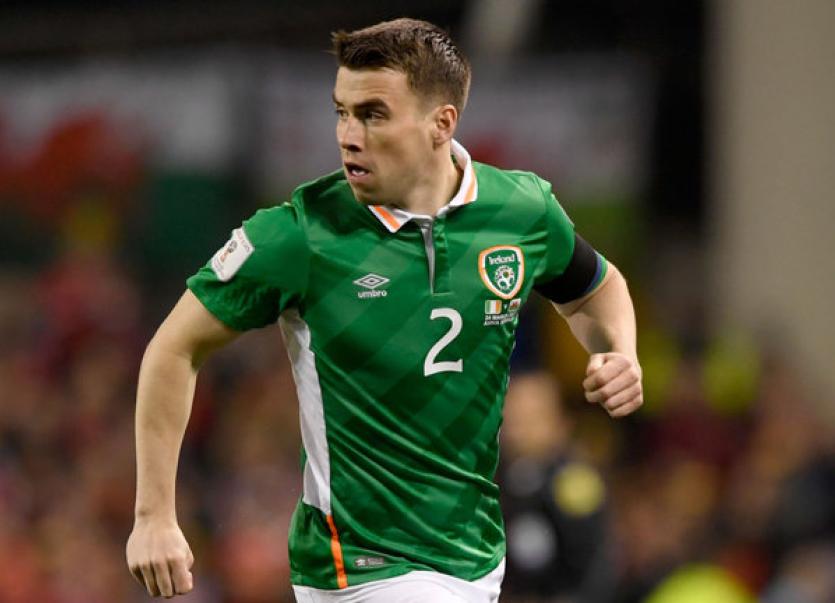 Killybegs Seamus Coleman will lead Ireland in two games next week against Switzerland and Bulgaria. Both games area in Dublin's Aviva Stadium with the Switzerland game a Euro 2020 qualifier and Bulgaria a friendly game.
New Crystal Palace midfielder James McCarthy is a step closer to a first game for the Republic of Ireland under Mick McCarthy after he was included in the 25-man squad for the Dublin double header
Midfielders McCarthy, Alan Browne, Alan Judge and Jack Byrne and goalkeepers Keiren Westwood and Mark Travers are back in the Ireland squad for the crunch European Championship showdown with Switzerland and the Three International Friendly against Bulgaria.
Irish boss Mick McCarthy has recalled namesake McCarthy after again watching him in action for new club Crystal Palace against Colchester United on Tuesday night, while Alan Judge and Alan Browne are fit again after injury kept them out of the home win over Gibraltar last time out.
McCarthy will be in Tallaght Stadium on Friday night to watch Shamrock Rovers trickster Byrne in the big Dublin derby against Bohemians in the SSE Airtricity League.
“The big thing in picking this squad has been game-time for the players,” McCarthy told FAI.ie as international football returns next week.
“I named a 40-man provisional squad a fortnight ago because so many of the players had yet to play for their clubs but thankfully that situation has improved dramatically since then.
“I watched James McCarthy play the full 90 minutes for Palace in the Carabao Cup on Tuesday while Alan Kelly was at Burnley on Wednesday night to see Jeff Hendrick and Kevin Long start against Sunderland.
“Alan Browne is back in the team at Preston and Mark Travers started for Bournemouth on Wednesday and saved three penalties. Conor Hourihane scored two goals for Aston Villa at Crewe on Tuesday and Glenn Whelan is playing again now that he has signed for Hearts. It is great to have them back on the pitch ahead of such a big game against the Swiss and then for the friendly against Bulgaria.
“I’m also looking forward to seeing Jack Byrne in action for Rovers against Bohs on Friday night. He got two great goals in Waterford last week and he is the form player for Stephen Bradley right now.”
As expected Robbie Brady, who scored the second goal against Gibraltar in the 2-0 home win in June, misses out as he has yet to recover from the rib injury that has sidelined him all season.
Fulham midfielder Harry Arter is absent as he requires a procedure on an ankle injury, while Michael Obafemi, Troy Parrott and Nathan Collins will stay with Stephen Kenny’s Under-21 squad for their EURO qualifiers against Armenia and Sweden but remain on stand-by for the senior games.
“I have spoken to Stephen [Kenny] and it is best for the players and our hopes of Under-21 qualification for them to be involved for the Armenia and Swedish games at this stage,” added McCarthy.
“Robbie has been close to a comeback with Burnley in the past few days but these games have just come too soon for him. We want him back for the games away to Georgia and Switzerland in October.”
Keen to get as many fans as possible behind his team for the Swiss game next Thursday, McCarthy has called on the Ireland fans to make it a special night at the Aviva.
“I’ve seen the calls for the supporters to bring the noise to the Aviva and I agree with that,” added the Ireland boss. “This is a huge game, the biggest in the group to date, and we need a special atmosphere inside the Aviva Stadium against Switzerland with the fans right behind us.”
Tickets for Ireland v Switzerland and Ireland v Bulgaria are available now via www.fai.ie/tickets