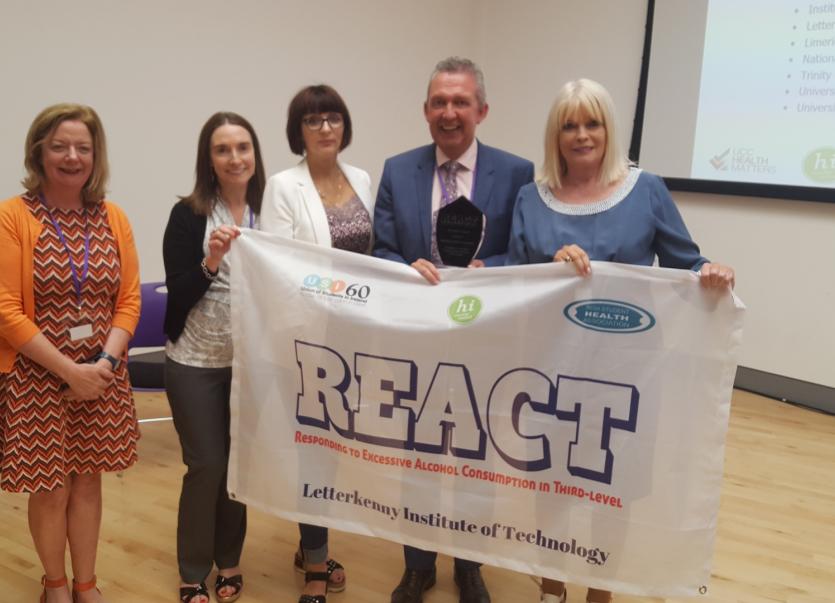 Letterkenny Institute of Technology has picked up an award for its efforts to reduce harm experienced by students from excess use of alcohol.

LYIT was one of ten third-level institutions which received an award from the Minister of State for Higher Education Mary Mitchell O’Connor at a ceremony in DCU.

REACT is an awards and accreditation scheme for third level institutions that implement an action plan in partnership with their students and student leaders that seeks to reduce the adverse consequences of excess alcohol consumption.

Institutions were required to complete eight mandatory actions and pick from a larger suite of 18 optional actions to devise and implement their own institution-specific action plans rolled out over the past four years.

In 2015, 15 of the country’s third level institutions expressed an interest in committing to the programme, which was developed by UCC Health Matters in collaboration with the Union of Students in Ireland and the Irish Student Health Association and jointly funded by the HSE and the Philanthropic Tomar Trust.

Over the four years, ten of the institutions continued their efforts and details of their actions were submitted for evaluation and accreditation by independent reviewers in June this year, with all ten recognised at the awards ceremony in DCU.

Speaking after picking up the award, LYIT President Paul Hannigan said: “This is a fantastic endorsement of the work of the Students Union at LYIT to raise awareness of and develop actions to address the harmful effects of alcohol.  The collaborative nature of the work with stakeholders such as the National Alcohol Forum and the Gardaí reflect a very positive initiative for LYIT that has complete support from management.”

Speaking at the event, Minister Mitchell O’Connor highlighted the work in two Institutes of Technology in the North West who received the award; ‘Letterkenny IT and IT Sligo partnered with the National Alcohol Forum in delivering the interventions, with REACT being the cornerstone of the Letterkenny local alcohol community action plan’.

Some key developments in Letterkenny IT have included the introduction of 11% of student accommodation being alcohol-free and the development of a complaints procedure in partnership with gardaí where students can report aggressive alcohol advertising or promotions that encourage harmful levels of binge drinking.

“Last year, as Education/Communication Officer, I worked alongside Paul on REACT and the safety of students was key.  We’ve also introduced alternatives to alcohol at student events, for example during Rag Week last year we had a mocktail event which was so successful we had added two mocktail events to our Freshers Week this year.”

Paula Leonard from the Alcohol Forum congratulated the LYIT on their award and emphasised the importance of student-led initiatives. “We’ve been really glad to be involved in supporting this initiative locally and the student activism and leadership has been impressive.  The Alcohol Forum was involved in the original REACT steering group back in 2015, so it was wonderful to see that ten institutions from the original 15 who expressed an interest have been successful.”