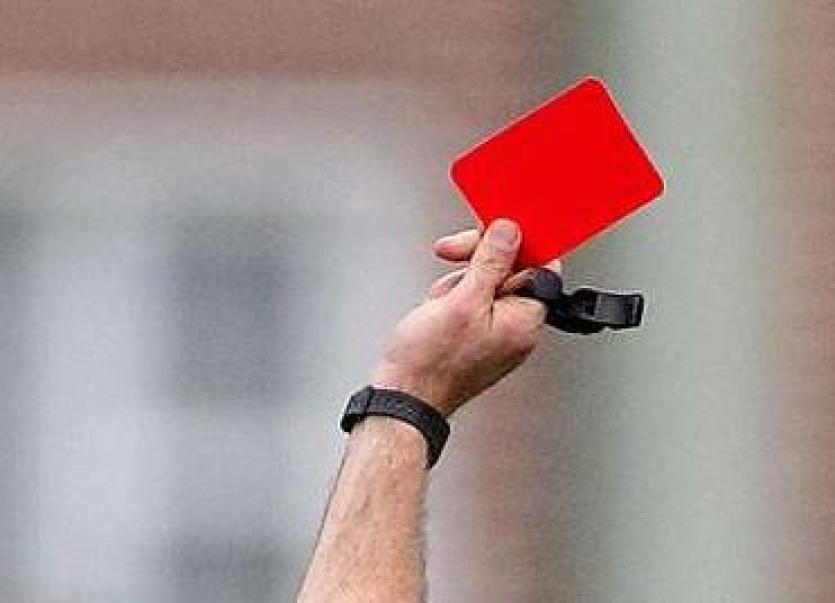 three Aodh Ruadh and one Naomh Muire player sent off

In a game you couldn't describe as 'dirty', four players, three from the visiting Aodh Ruadh side, were given red cards at The Banks in this always interesting Group B Intermediate Championship tie on Saturday evening.

While the standard of football and finishing was mixed, there were some fine patches of play from both sides that were engrossing but in truth the game will be forever remembered for a truly outstanding goal in the final seconds from Naomh Muire's midfielder Ultan Boyle.

With his side three points behind and the Ballyshannon visitors down to 12 men and under pressure from relentless attacking by the home side, Boyle pounced on a ball lost as Aodh Ruadh came out of defence. From roughly 25 metres he seized the day with a terrific shot which flew bullet-like to the top corner, well beyond the reach of Aodh Ruadh keeper, Peter Boyle.

With the sides level, spectators assumed there was time for another score or more but referee Andrew Mullin blew the full time whistle 37 seconds into added time.

In retrospect perhaps neither team deserved to lose, both could have won the game outright, Naomh Muire often wayward from play and frees, Aodh Ruadh denied a number of possible goals by fantastic goalkeeping from the host's net-minder, Declan Ward.

On a perfect evening for football, Aodh Ruadh arrived notably under strength, Eamon McGrath, Nathan Boyle, Oisin Rooney, Darren Drummond and Johnny Gettins all absent through injury, holidays or study/work commitments. Gettins, wary of a hamstring twinge, was however, introduced on 38 minutes and made an important contribution linking defence and attack with his high energy running game.

Both sides were down to 14 men after 14 minutes when an off the ball incident was punished with reds shown to a player from both teams, Niall Murray (Aodh Ruadh) and Brian Gillespie. In the second half Aodh Ruadh lost two more on 42 and 48 minutes, Sean Taylor's card for an indiscretion off the ball which was spotted by linesman James Connors while Cian Dolan followed him after he reacted to a closed fist tackle.

Despite the cards,  it wasn't a bad tempered or nasty game by any means.

In the opening 20 minutes Naomh Muire were well in control and led 0-4 to 0-1, Sean The Yank Boyle scoring from four frees with Philip Patton on target for Aodh Ruadh. But Naomh Muire had a poor final ten minutes allowing Aodh Ruadh back into the game, needless fouling and poor passing out of defence their downfall as scores from Peter Boyle (free), Diarmaid McInerney, Philip Patton (play and a free) and Shane McGrath put the visitors 0-6 to 0-4 ahead by half-time.

Early in the second half Philip Patton and Sean The Yank Boyle traded pointed frees, Boyle added his only score from play to narrow the gap to one point but CP Patton put Aodh Ruadh two ahead again 0-8 to 0-6 by the 38th minute. Nine minutes later Naomh Muire were just one point behind thanks to a deflected point from an Aodh Ruadh defender and Aodh Ruadh were now down to 12 men.

Manager Barry Ward introduced noted runners/ball carriers Johnny Gettins and Paddy Gillespie who covered oceans of ground for Aodh Ruadh. The Ernesiders played their best football when reduced to 12 - Shane Gillespie finishing a strong run with a great point and Philip Patton pointing a 55th minute free to give his side a 0-10 to 0-7 lead. They withstood an onslaught and looked to be home and dry despite losing three players to cards.

Undaunted, Naomh Muire pressed for scores but poor finishing and stout defending saw them fail to make any impact until Ultan Boyle's stunning late goal gave them a share of the spoils.

Sean The Yank Boyle with 0-6, despite a few costly missed frees, was Naomh Muire's most consistent threat, Aidy O'Gara did well as did teenager Fintan Doherty while keeper Declan Ward made some wonderful saves for the home team. CP Patton and Johnny Gallagher were steady throughout for Aodh Ruadh while Shane Gillespie also performed consistently for an Aodh Ruadh side who, at times, showed a costly lack of composure.