Second half dismissal a key moment in close contest 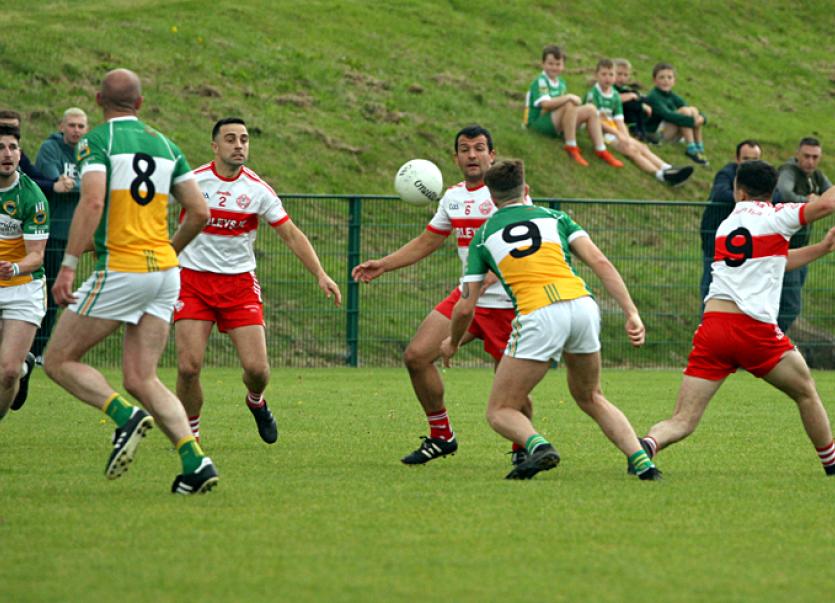 It’s hard to know which team will be the happier after Glenfin and Glenswilly had to settle for a draw in a hugely enjoyable Group C encounter at Pairc Taobhoige on Sunday afternoon.

Given that they led this game for so long, Glenfin will perhaps be more disappointed not to have won.

But they were made pay when they were reduced to 14 men midway through the second half - their goalscorer Ciaran Brady receiving a straight red card when an off-the-ball incident was reported to match referee James Connors by one of his umpires.

It was a costly incident. Glenfin were leading 1-9 to 0-9 going into the final quarter and when Aaron McGlynn kicked a brilliant point after soloing forward from half-way, the home side were looking good.

But with the extra man, Glenswilly were able to lift their game for the closing period and bit by bit they managed to eat into Glenfin’s four point lead.

Substitutes Donnacha Gallagher and Stephen O’Donnell both kicked brilliant late points but it was left to Michael Murphy to kick the all-important equalising score deep in injury time at the finish to level the game.

Glenswilly had been the better team early on and a well taken point from play from Caoimhin Marly put them 0-5 to 0-3 in front with 13 minutes played.

But strangely Glenswilly didn’t score again until four minutes were played in injury time as Glenfin bossed the game. They off-loaded at pace and produced some wonderful attacking play and in Gerard Ward, they had an assured free-taker, no matter the distance.

Brady’s goal came just before half-time when an Aaron McGlynn shot rebounded off the crossbar but Brady was on hand to bravely palm the ball home - his momentum taking him into the post and he needed treatment afterwards to a nasty gash to the eye.

At the break, Glenfin led 1-7 to 0-6 and Glenswilly looked in a spot of bother.

They brought on Donnacha Gallagher and Paddy Diver for the second half and minutes later, Ciaran Bonner was sprung from the bench as they sought a way back.

Glenfin however, were able to maintain a decent lead with midfielder Stephen Ward gaining the upperhand in that sector.

But the dismissal of Ciaran Brady was a major blow to the home side and Glenswilly, thanks to some quality late scores, just about managed to get out of jail.