Protest at minister's office over pay and conditions 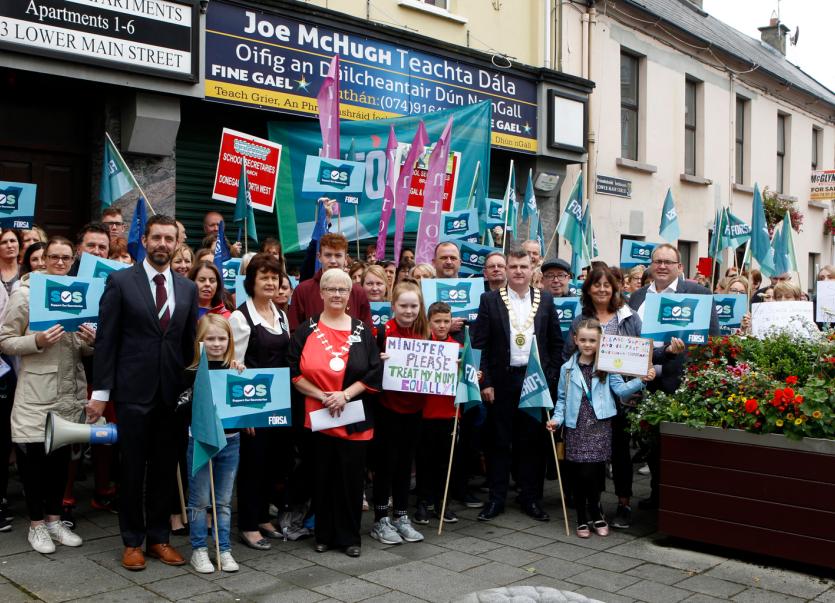 School secretaries across the country are to take industrial action over pay and conditions later this month.
The result of the ballot for industrial action from September 20 comes after school secretaries and their supporters from all over Donegal gathered at Minister for Education and Skills Joe McHugh's office in Letterkenny last Saturday. The protest was to highlight what they say are inequalities they suffer because of a two-tier pay system that leaves most of them on the statutory minimum wage.
One of the local organisers, Kathleen O'Doherty of the education division of the Fórsa union, said they were disappointed the minister did not turn up despite being in the town at another event.
She said while they accepted the minister had other commitments on the day, it would have been a positive sign if he had attended their rally and addressed the members.
“We were very happy with the turnout, over 100 people attended. We had representatives from the TUI, the INTO, teachers, school staff, SNAs, local councillors and of course parents. The assistant general secretary of Fórsa, Barry Cunningham and the union president, Anne McGee, were also present."
"We know the minister is aware of our case and he would have known we were holding a rally in Letterkenny. We were told he was actually in the locality, at a hurling event in St Eunan's GAA club. We appreciate that he has other commitments but it would have been nice if he had come along and address us. We were disappointed but in fairness, we've always had good relations with him but on this occasion, it would have been nice for him to attend," she said.