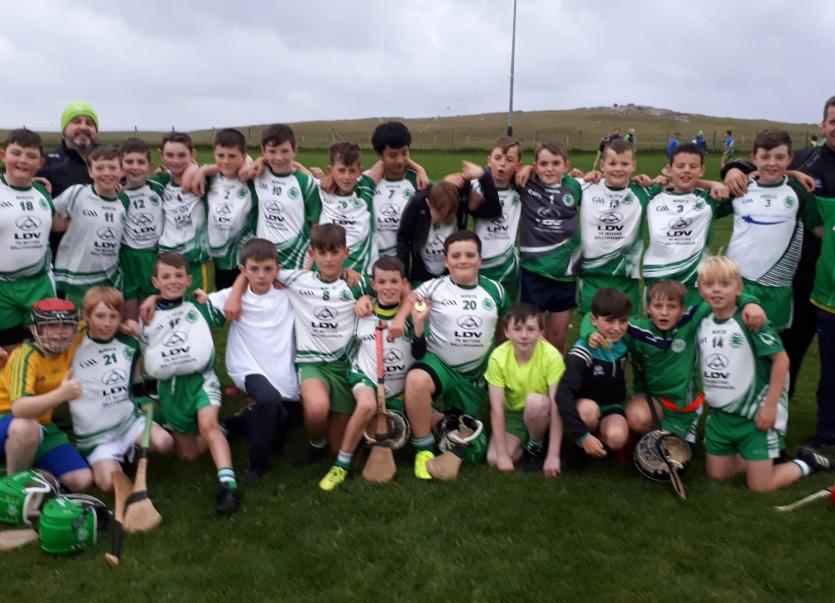 The spirit of Cú Chulainn was evoked in many ways in windy Magheragallon on Thursday evening as two gallant hurling teams gave us a game to remember with the final outcome, a one point win for the visitors, in doubt until the final whistle of an outstanding contest.

Gaoth Dobhair had two late chances from frees to level or better still, win this under 12 final, but a scuffy wind contrived to push both well struck efforts wide of the wavin wind-bent upright.
Honour and bravery are traits of all great sports people and we had this in abundance from both squads. You must remember that a handful of the players on view are not much bigger than a creamery can.
But height and brawn mattered little as boys and one very talented girl (Sarah Jane Hartnett) tore into each other. There was no 'simulation' here. The only diving witnessed came as players put their limbs on the line to block the sliothar. No theatrics, no moaning, no one aiming or claiming a wayward blow.

They just got on with it and their mentors and managers deserve great credit for the wonderful way they coached and coaxed their players in this very sporting contest.
And, all the time, in the background wind-wound waves danced and crashed white on the shore and the wind would cut you in two on an evening that was out of kilter with early September.
While the weather wasn't ideal, the game was blessed by the appointment of Jamesy Connors as referee. His cool head and wise words and encouragement to the players worked a treat and he was the epitome of fairness to all and was, not surprisingly, praised by both sides after the game.

Early lead
Aodh Ruadh settled quickly and went into an early lead scoring 2-1 without reply, two great goals from Corey Sheridan and a well taken point, Sheridan outstanding throughout the game.
Gaoth Dobhair clawed back 1-2 before half time leaving the score Ballyshannon 2-1, Gaoth Dobhair 1-2. The Gaoth Dobhair goal coming from the excellent Pádraig Mac Giolla Bhríde.
The second half was a spectacle of hurling with both teams going for broke. Two frees from Cianan McDaid levelled the scores with the wind now at the home team's backs. Ballyshannon made their possession pay and edged ahead with about five minutes left to lead 2-2 to 1-4, Sheridan hitting the net for a second time.
Gaoth Dobhair threw everything at Ballyshannon but couldn't get the scores they needed.

** There was a lot going on on Thursday night at the Gaoth Dobhair venue. Across the road on their new pitch the Gaoth Dobhair senior panel were warming up for their last training session before their club championship joust with St Eunan's. Neil McGee was looking fit and strong. Early arrival Ódhran MacNiallais pulled a net bag with 15 balls in it out of his boot and I'm reliably informed he stuck 13 of the 15 over the bar from all angles - in a near gale - as he fine-tuned his free taking. All this was going on around us and inside the impressive clubhouse they were coming from near and far to play bingo. Each to their own, anyone lucky enough to watch the hurling hit the jackpot too thanks two great young teams giving it their all. The Gaoth Dobhair team, manager and mentors before the final