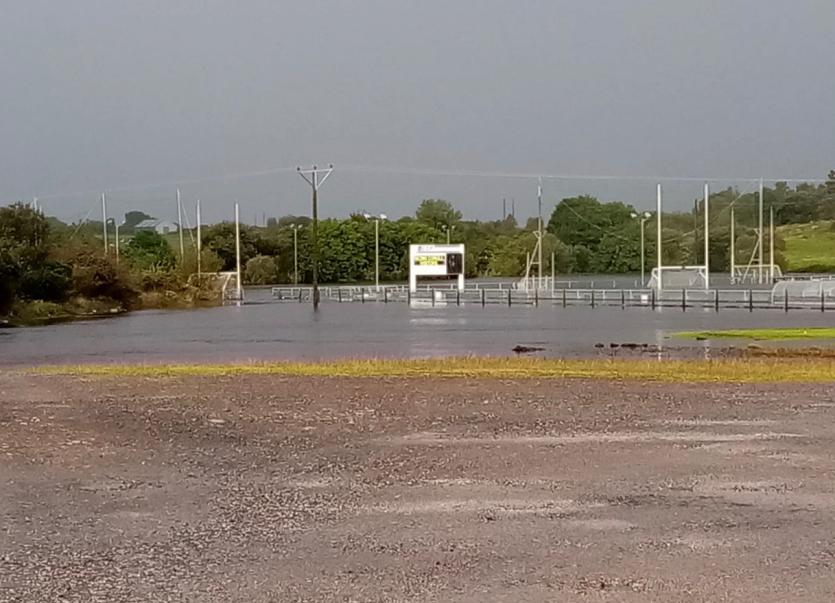 The chairman of Naomh Conaill GAA club in Glenties is calling on all the relevant agencies to come together to address the fall-out from the recent flooding in the area.
The call was made this week by chairman David Kelch in the wake of the recent flooding of the club grounds at Davy Brennan Memorial Park.
The grounds were submerged in over two foot of water last Saturday week when the Stranaglough river overflowed after heavy rain throughout Friday and overnight.
“The club’s main ground and training ground, car parks and the road around the ground were under over two foot of water for a number of hours,” Mr Kelch said.
“The main pitch and the training pitch which is along the banks of the river were completely immersed in water and the clubrooms and dressing rooms were close to being flooded.
“The clubroom and dressing rooms are approximately three feet above ground level. There are three steps up to the clubrooms and the water was just up to the third step.
“That is how close it came and our worry going forward is that the next time we might not be so lucky.”

First time
The chairman said it was the first time the main pitch had been flooded since the new facilities were built 15 or 16 years ago.
“But the training pitch has been flooded a number of times,” he pointed out.
“The most recent was just three weeks ago. The number of incidents of flooding are certainly become more frequent.”
The flooding occurs when heavy rain coincides with high tides. The only remedy to it is the cleaning of the river but according to the Naomh Conaill chairman, that’s not permitted for environmental reasons.
“It is for the protection of a special species of mussel in the river bed.
“That is all well and good but something needs to be done because it is quite obvious the incidents of flooding are increasing.”
The Naomh Conaill facilities are not the only areas affected in the Glenties area. Mr Kelch also insists there are a number of other flash points in the area too.
“A section of the main Glenties to Ardara Road outside the town was flooded too and houses were under threat.
“The housing estate on the road to the pitch, Naomh Conaill Close, was also under threat.
“It is not just the facilities that are affected. There are a number of other areas, though my main concern as chairman of Naomh Conaill is the GAA property.
“Something needs to be done and all the relevant bodies - Donegal County Council, the OPW, Waterways Ireland the Environmental agency are all going to have to come together and come up with a solution to the problem.”
A clean-up of the grounds was carried out when the flooding subsided and Dany Brennan Memorial Park played host to the Senior Championship meeting of Naomh Conaill and Killybegs last Sunday.