Dungloe ball washed up on west coast of Scotland 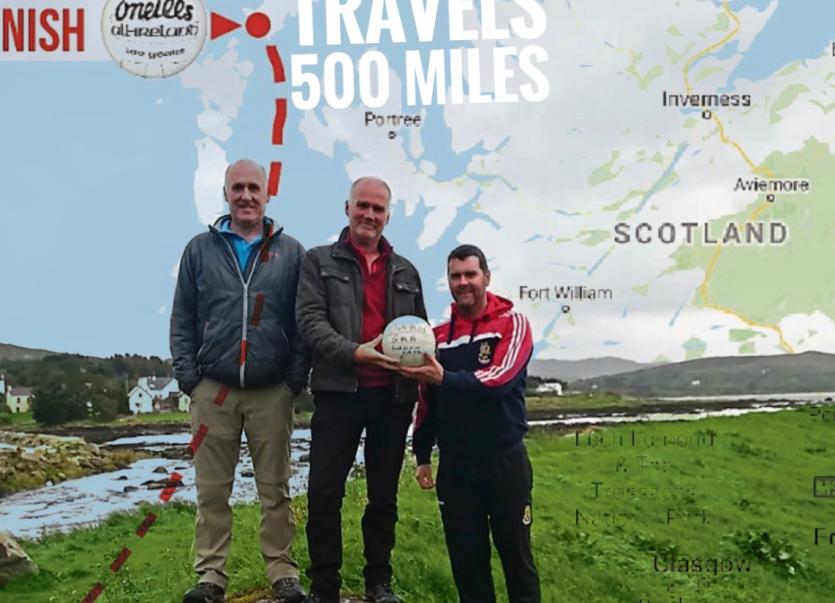 A Donegal football team has been reunited two and a half years later with one of its footballs which travelled 500 miles before washing up in the Outer Hebrides off the west coast of Scotland.
Dungloe GAA ladies senior team were reunited with the football in the Dungloe clubhouse on Friday evening when it was returned by Arthur and David Heyes from the Outer Hebrides, off the west coast of Scotland.
Arthur discovered the football washed up on a beach near his home at the end of May, 2017 and after making contact with the west Donegal club, he pledged he would return the football in person.
Two years and four months later Arthur lived up to his pledge and accompanied by his brother David, he returned the football in person and handed it over to team officials on Friday evening.
It is only a second ever time in Donegal for the Heyes brothers. The last time was all of 53 years ago. Arthur remembers being huddled around a transistor as a young boy in 1966 on Fintra beach, just north of Killybegs, listening to the 1966 World Cup.
LONG JOURNEY
The football began its long journey on the evening of May 5, 2017 when, during a routine training session on the club’s shore training pitch the ball ended up in the Dungloe river estuary.
It was quickly swept out into Dungloe Bay and at the time thought to be gone forever.
However, 17 days later the club received an SOS call from Arthur Heyes who informed them he had found the missing football which carried the words ‘Dungloe GAA’ 500 miles away off the Scottish coast. The football signed and dated by Arthur and David will now be retired after its wild Atlantic adventure and will go on display in the clubhouse on the Carnmore Road.