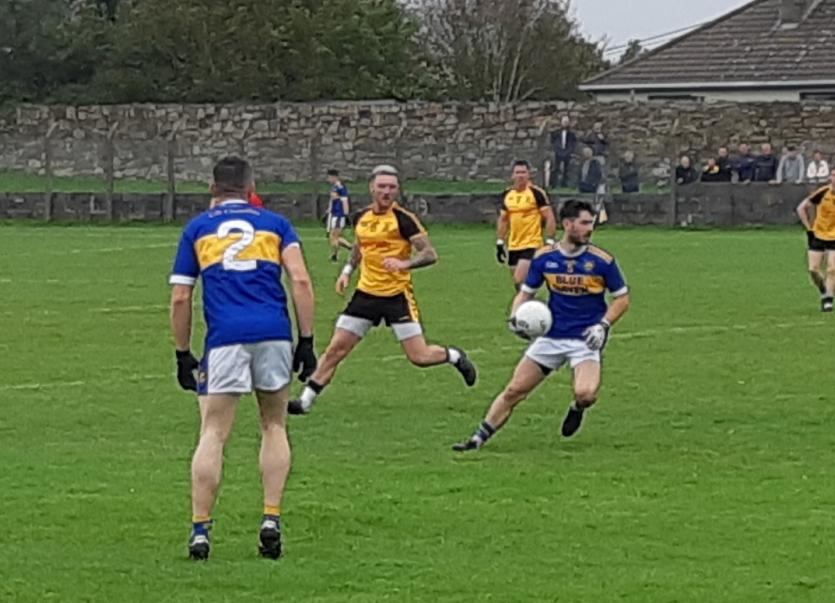 Kilcar did just enough to get the win and assure themselves of a quarter-final place with a win over Bundoran in Gaelic Park.

The south-west side were always in control and had an eight point half-time lead. Bundoran won the second half by a point but any chance they had of causing an upset was gone when Paul Brennan picked up two yellows midway through the half, both for lazy high tackles on Mark McHugh.
Both sides weres short a number of regulars with Ciaran McGinley and Michael Hegarty the notable absentees from Kilcar with Stephen McBrearty making a welcome return after appendicitus.
Bundoran seemed to be putting a few eggs in the basket for the vital final game next week in Malin as Cian McEniff, Tommy Goverov and Niall Carr were rested with niggling injuries.
Kilcar were just too lively up front with six different scorers in the opening half alone. They led 1-11 to 0-6 at the break, dominating possession.
But despite that Bundoran could point to four goal chances that went abegging. Jamie Brennan had two of them, his first touch letting him down on eight minutes, while he blazed wide from in front later on.
A high ball from Brian McHenry bounced in front of the Kilcar goal on 21 minutes but somehow stayed out while Paul Brennan had another chance at the end of the half.
Kilcar had the opening four points, all from different players before Gary Clancy got Bundoran on the board. Patrick McBrearty (free), Matthew McClean, Eoin McHugh and Conor Doherty had the Kilcar points.
Midway through the half Ryan McHugh made a significant input, hitting 1-2 in three minutes, the goal after great approach work by Stephen McBrearty and Conor Doherty.
Jamie Brennan did have a couple of points for Bundoran and Gary Clancy also chipped in but they needed to be more clinical with the goal chances. Eoin McHugh forced a great save from Conor Carty while Matthew McClean finished the half with three points.
The second half was something of a formality and became a shoot-out between Gary Clancy and Patrick McBrearty, Clancy finishing with a tally of 0-10.
A Jamie Brennan goal on 46 minutes cut the deficit to five, 1-14 to 1-9, but that was as close as Bundoran got.