Naomh Conaill have narrow win over MacCumhaills to top their group 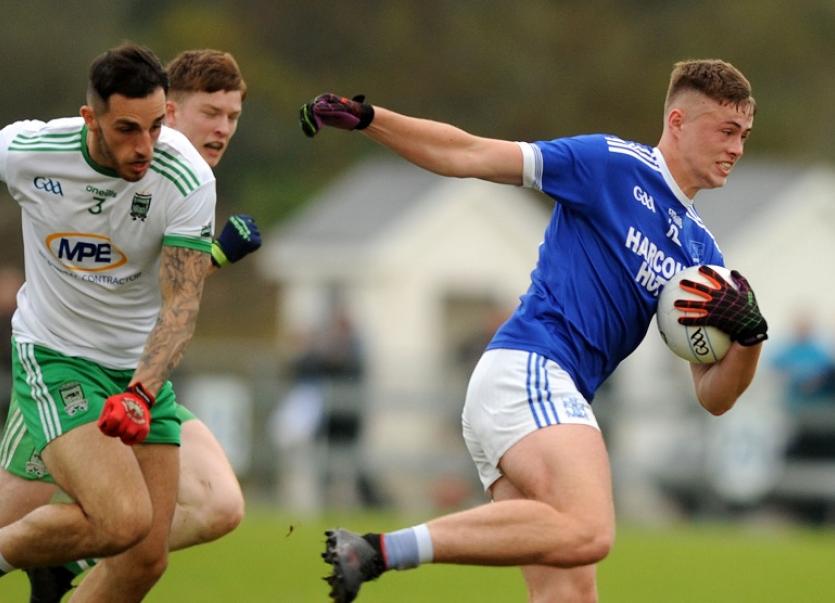 Kieran Gallagher breaks through for Naomh Conaill against MacCumhaills

Naomh Conaill made it three wins from three games to top the group with a three point win over Sean MacCumhaills in Davy Brennan Park, this evening.

MacCumhaills played with whatever advantage there was from the crossfield swirling wind and got off to a flying start.

Oisin Gallen got them off the mark inside a minute and they were 0-2 to 0-0 up after Darren O’Leary converted a close-in free on two minutes.

The opening exchanges were pretty stop start and pretty tetchy and referee Seamus McGonigle flashed the first of his seven yellow cards as early as the third minute.

Andrew McCloskey and Eoghan McGettigan were first into the official’s book for tangling on the ground off the ball.

Leo McLoone got the locals up and running with a fine point seconds after Ciaran Thompson blasted a fifth minute penalty wide.

The penalty was awarded following  a foot block on Charles McGuinness just as he was about to pull the trigger on the edge of the small rectangle.

Naomh Conaill had a couple of half goal chances in this period but brave defending by Marty Gallagher Nathan Gavigan with diving blocks denied them.

With Anthony and Ciaran Thompson and Eoghan McGettigan rising to the challenge Naomh Conaill nailed on the next four scores to go 0-5 to 0-2 ahead by the 26th minute; Ciaran Thompson (2) Dermot Brick Molloy and Nathan Byrne kicked the points.

Luke Gavigan landed MacCumhaills third on the stroke of half-time as Naomh Conaill went in two up at the break.

Charles McGuinness, Ciaran Gallagher and Brick Molloy posted three quick points on the resumption to open up a five point lead, 0-8 to 0-3.

Gary Wilson and Gallen either side of another Brick Molloy white flag cut the lead.

But with Naomh Conaill turning the screw in the middle of the half Ciaran Gallagher, Anthony Thompson and Ciaran Thomspon extended the Naomh Conaill advantage out to seven points, 0-12 to 0-5 with five minutes left on the clock. Mac Cumhaills through McSorley, Gallen and O’Leary hit late points to reduce the margin to three.

Naomh Conaill finished the game with 14 players after Eoghan McGettigan picked up a second yellow card ten minutes from the end.