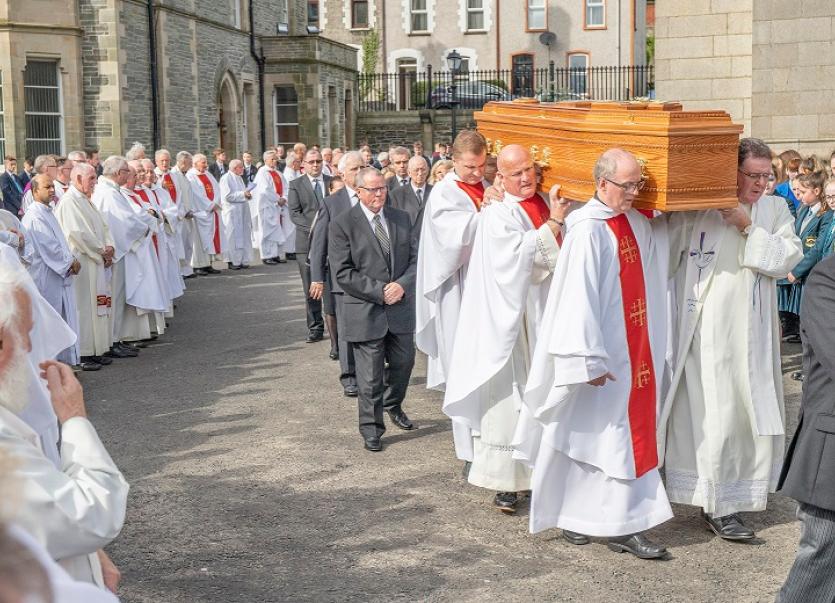 The former Bishop of Raphoe Dr Séamus Hegarty had a great love of his native county, mourners at his funeral have been told.
Dr Hegarty, Bishop Emeritus of Derry, passed away in Letterkenny University Hospital on Friday at the age of 79 after a long illness.
Born in Kilcar in 1940 he was ordained in June 1966 and taught in St Eunan's College and then Coláiste na Croise in Falcarragh.
He was ordained Bishop of Raphoe in 1982 and served as Bishop of Derry from 1994 to 2011 before retiring on health grounds.
Over 100 members of the clergy attended Bishop Hegarty’s Requiem Mass at Saint Eugene’s Cathedral in Derry on Monday including the Derry-born Archbishop of Armagh Eamon Martin, former Primate Cardinal Seán Brady, Bishop of Raphoe Alan McGuckian and former Bishop of Raphoe Philip Boyce.
Requiem Mass was celebrated by Bishop of Derry Donal McKeown and mourners included Archdeacon Robert Millar, Dean of St Columb’s Cathedral Raymond Stewart and former Bishop of Derry and Raphoe Ken Good.
Children from local schools formed a guard of honour outside the cathedral.
Mourners also included Leas Cheann Comhairle of Dáil Éireann Pat ‘the Cope’ Gallagher, SDLP leader Colum Eastwood, former SDLP leader Mark Durkan and former Donegal footballer Martin McHugh.

Bishop McKeown read a letter from Pope Francis who gave thanks for the late bishop’s years of ministry.
Dr Hegarty had a great love of the county and his native soil, Dr McKeown said. He also had a passion for the Irish language and the traditions of his native county.
He said life was not easy for Bishop Hegarty growing up as his mother Mary died in childbirth when he, the eldest of three, was just seven.

But education provided the opportunity for him to seek broader horizons. He became a fluent German speaker and spent time in parishes in Germany.
He came to Derry as bishop during the Troubles and “like many church people he used all possible channels to stop killing and build bridges,” Bishop McKewon said.
Referring to the allegations of clerical sex abuse which would overshadow Bishop Hegarty’s ministries in Raphoe and Derry, Bishop McKeown said: “For a range of reasons grave errors were made in responding to a wave of allegations.
“The dioceses of Derry and Raphoe were no different than anywhere else,” he said.
He said Bishop Hegarty had a great sense of commitment to Irish emigrants and “worked tirelessly with others to support the emigrant chaplaincies around the world".
His passion for education meant that many of the excellent schools in the Derry diocese were built during Dr Hegarty’s time as bishop, the Bishop of Derry said.
He was also very committed to the pro-life movement, Dr McKeown said.
In his homily, Bishop McKeown said Bishop Hegarty “bore the many burdens of office with complete dedication”.

He had an unflagging loyalty to the church and to its service in whatever role he was asked to do, Dr McKeown said.
He was a simple man and “kindness and generosity were hallmarks of his nature even though a tougher exterior might sometimes have shown itself,” he said.
Bishop Hegarty is survived by his brother Dr Diarmuid Hegarty, his sister Marie Cunningham, sister-in-law Marie, brother-in-law Joey, nieces, nephews, grandnieces and grandnephews, and a wide family circle.
He was laid to rest in the grounds of Saint Eugene’s Cathedral following Requiem Mass.