Gap remains six points at bottom of the Premier 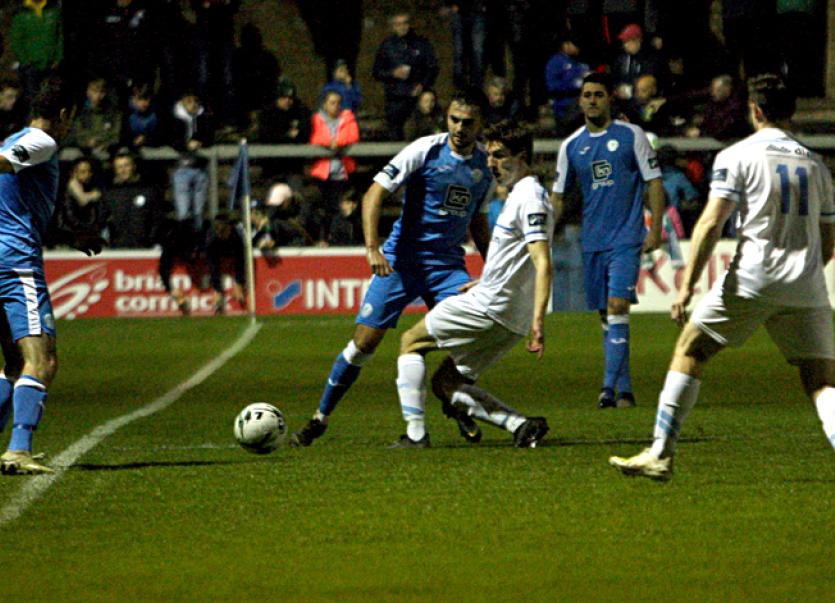 It’s as you were at the basement of the Premier Division following Friday night’s scoreless draw between the bottom two at Finn Park.

Harps remain six points better off than their relegation rivals and with just three games left to play, they look a good bet to avoid automatic relegation.

However, given the number of clear-cut opportunities that came their way in this game, Harps will be disappointed not to have taken the win.

They carried the greater threat and with Mark Coyle, Raff Cretaro and substitute Stephen Doherty all going close, they had enough chances to win this game, But they let UCD off the hook on a night when a Harps win would surely have ended UCD’s season.

As it is, UCD still have a chance of survival - although even they will accept they remain firm favourites to make the drop.

The Harps boss, watching from high in the press gantry.  will have been happy with his team’s efforts early on. They started well, winning a string of long-throws in the opening minutes and Tony McNamee’s deliveries caused the visiting defence no end of problems.

That early Harps pressure set the tone for the first half. They were the better side and the UCD backline looked far from assured on occasions.

Coyle had the best chance early on. He worked a brilliant opening on the edge of the UCD area and when he broke into the box, he shot across the face of goal and just wide of the far post.

Harps had other chances too - twice UCD cleared the ball off their own line following set-pieces. And from another Harps corner, Cretaro showed wonderful close control to get away from his man but his close-range effort was saved by keeper Kearns.

At the other end, UCD were always a threat coming forward but they failed to trouble Mark Anthony McGinley in the first half. Their one and only chance came after a quick break-away but Yousef Mahdy was crowded out and his shot was blocked down on its way into the arms of McGinley.

If anything, Harps will have been disappointed not to have gone in ahead at the break. Just before the interval they forced another wonderful opening but after being played clear, Coyle delayed his shot and the chance was wasted.

UCD were much improved after the break and while Cretaro missed another gilt-edged chance, shooting wide from close range, the visitors created their one big chance of the night.

A brilliant three-man move ended with Jason McClelland played in on goal but his left footed effort produced a magnificent diving save from McGinley.

Harps brought on Stephen Doherty and Gareth Harkin for the closing quarter and their introduction brought a real spark to the home side.

Doherty saw a well struck effort well saved by Kearns and then right at the death, Harkin’s pass released Cretaro on goal. But the striker took too many touches and the chance was wasted.

With it went Harps’ hopes of recording a much needed win. As it is, the draw won’t be considered a disaster at such a late stage of the campaign.